Mesko’s Mistakes Enough To Force A Move To Be Made 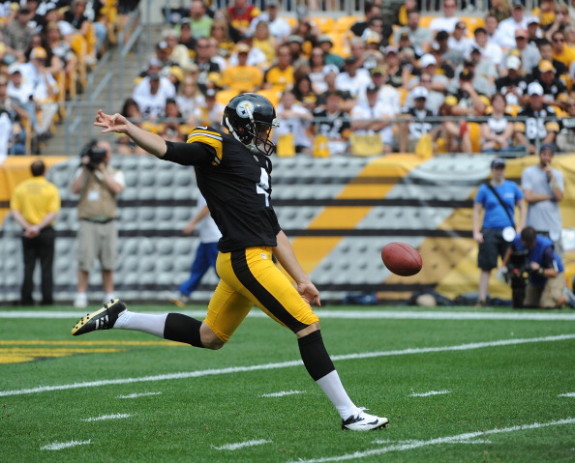 While kicker Shaun Suisham was at the forefront of a lot of furor for Steelers fans Sunday evening, another player should be on the minds of Steeler Nation when it comes to blame.

Mesko, who came to the Steelers in a shocking move after the final preseason game, has been nothing short of a major bust for a special teams unit that was terrible Sunday in Oakland.

First there was Mesko, as in the first quarter he bobbled a snap that resulted in a partially blocked punt. The great field position eventually allowed the Raiders to score to make it 14-0.

Then there’s the fact that his punts have been less than stellar this season, which could be the reason why Mesko was on the market a week before the season started.

The 27-year-old Mesko is making $540,000 this season, and coming to the team many felt he would be an upgrade over Drew Butler.

It was a bold move with the season so close, and Butler seemed to have a good enough camp to win the spot.

Butler won a battle in camp with former Bills punter Brian Moorman, but the coaching staff just felt that they might have hit the jackpot getting Mesko.

Instead of a jackpot, the team might want to fold, and dump Mesko and go back in the market to get Butler, who is available.

Last season with the Pats, Mesko had gross and net punt averages of 43.1 and 37.9 yards. They were not huge numbers, but close enough to Butler to make the team anxious to pull the trigger.

Steelers Special Teams Coach Danny Smith has not had much to work with in 2013 with Mesko, as his average in 27 punts entering Sunday is 42.4 yards per punt.

Mesko has only had a pair of punter inside the 20, and there was more than one shot Sunday when a really solid punt would have helped the Steelers big time.

Instead, it was the same old Mesko, punting in the end zone, or hitting short punts that allowed the Raiders to have decent field position.

The time is now for Mike Tomlin and Smith to send Mesko and his resume packing. The team can get Butler, or if there’s another punter that can come in and make an impact.

They tried and thought they were getting that with Mesko.

Video: Roethlisberger, Clark And Tomlin On The Loss In Oakland
Monday Poll Questions Following The Loss To Oakland