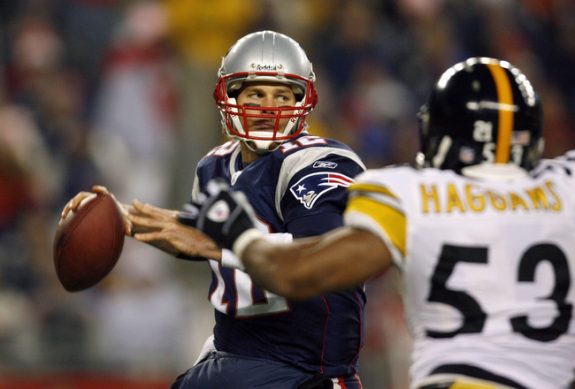 It’s never an easy task, asking a team to go into Foxboro and take down Tom Brady and the Patriots, and that’s the task at hand for the Steelers Sunday.

Never playing well in New England, the Steelers need to get off to a fast start, and pressure Brady all day if they want to get a win.

Today we give our keys to the game, and also give our final prediction for the battle between two teams that usually wind up in the mix for being conference champs in the AFC.

1. Creating Pressure on Brady A Bigger Key Than Normal – Let’s face it, Tom Brady is getting older, and it appears this season that (as even Ryan Clark pointed out this week), he’s not been as accurate then in seasons past. It’s time for LaMarr Woodley to get in on Brady a few times, and also it would be nice to see the secondary step up and hold down unproven Pats WR’s to allow time for pressure to make it’s way back to Brady.

2. Fast Start a Must – Anyone else tired of seeing the Steelers falling behind early and playing catchup? Yeah, me too. If they want to score a win in New England, getting off to a good start on bot sides of the ball is not something they would like to do, it’s something they HAVE to do. More so on offense, where this team has been a nightmare early in games. When they score early, they seem to build confidence, and they have to do that Sunday.

3. Win the Turnover Battle – The Steelers once again had issues against the Raiders in the turnover department, and when they had shots to turn the game around, they had a killer turnover. Let’s see if they can get a pick or two on Brady, and more importantly, the offense has to stay away from key turnovers and not allow themselves to give the Pats a short field at any point in the contest.

Prediction: The Pats are just flat out dominating at home, and the fact that the Steelers have been outscored at home 54-19 in first quarter, 84-54 in first half this season does not bode well. As stated above, they need a fast start, and also need to keep Brady and TE Rob Gronkowski at bay if they want to win. I can’t see after all the mistakes they have made in games 1 through 7 that suddenly it’s going to turn around – and more so on the road against a team that is so tough to beat at home. It won’t be pretty. New England 27 Pittsburgh 17