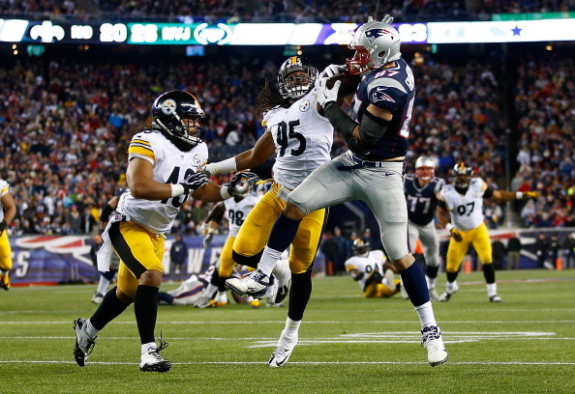 For about 15 minutes, the Steelers actually outplayed the Patriots and got back into what was a two-score lead for New England.

Then, as has happened plenty of times already in 2013, the Steelers were unable to make a play, or two, to make a difference, and the result was a 55-31 loss to the Patriots.

The loss puts the Steelers at 2-6 on the season, a rather stunning mark halfway into a season that many felt they would at least be at or near .500.

They gave up over 600 yards on defense and the 55 points are the most allowed in team history.

They are looking at by far their worst season under Mike Tomlin, and it’s hard to think that if the team doesn’t make vast improvements over the last eight weeks of the season that more sweeping changes won’t be coming.

The defense played well for about a quarter, getting one big turnover and one big three-and-out of Tom Brady, but otherwise they were owned most of the day.

New England put up a season high in yards, and Brady was dominant as he always seems to be against the Steelers, throwing for 432 yards on 23-for-33 passing.

He was bad last week against the Dolphins in a win, but was razor sharp against his old foe. He put up a 151.8 QB rating, and was great when he had to be most.

The Steelers were down 24-10 at half as Rob Gronkowski dominated the first half with a bunch of catches and a score.

The third quarter belonged to the Steelers, as a turnover caused by Troy Polamalu resulted in a touchdown pass from Ben Roethlisberger hit Jerricho Cotchery for a 20-yard score to make it 24-17.

Then a three-and-out allowed the Steelers to get another drive going, and it was a repeat as Ben hit Cotchery with an 8-yard score to make it 24 all.

The game though went right back to the Pats, as they were able to march down the field and get a Stephen Gostkowski 32-yard field goal with 3:32 left in the third to make it 27-24.

The Steelers offense never got going after that, and the Steelers defense melted with Brady hitting passes and putting up two more scores, the first a pass to Aaron Dobson from 17 yards out to make it 34-24.

Then another drive got the Pats a final seven as Stevan Ridley scored from five yards out to make it 41-24.

The game got out of hand late, as a Dobson 81-yard score and a short TD run by LeGarrette Blount put the Pats at the record 55 points.

First Half Insights From The Steelers 24-10 Deficit To The Patriots
Tomlin On The Loss To New England – “I Am Angry, I’m Disappointed”