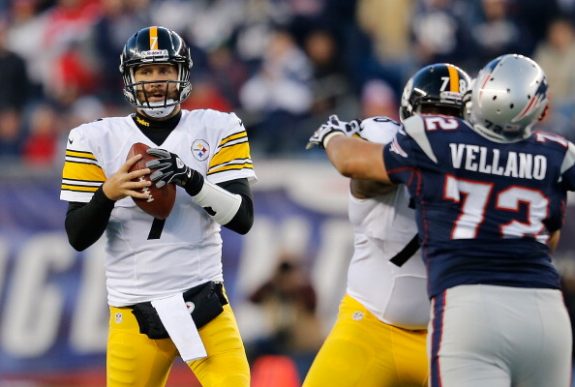 This season has been dreadful to say the least.  Losing is hard to swallow as a die hard fan, but the lack of enthusiasm and effort by the defense late in the game on Sunday was just down right embarrassing.  There were moments throughout the game that had momentum leaning towards the Steelers and they let multiple opportunities slip right through their fingers.

Losing is something this organization has not and should not ever get used to or comfortable with.  As a team with almost nothing left to salvage of this season, the Steelers went into Foxborough with high hopes.  Unfortunately,  the losing trend of the 2013 season continues and Steeler Nation is becoming more and more restless.

For the most part, the offense moved the ball and put points on the board.  Le’Veon Bell continued to show that he is consisdered a legitimate NFL talent.  Yes, he made a couple rookie mistakes at times, but his explosiveness and tenacity with the ball in his hands was refreshing to watch.  Jerricho Cotchery also had a good game and played like the season was on the line.

Although Ben had great statistics and did have a good game, he made some mistakes that in my opinion ultimately cost the Steelers the game.  After a great goal line stand, Ben turns around and immediately throws an interception which led to a Patriots touchdown less than 10 seconds later.  These are mistakes that Ben continues to make and as a veteran quarterback,  you need to avoid at all cost to give this team a chance to win. Offensive Grade: A-

As much as fans do not want to admit it, this Steelers defense is old, slow, and right now lack talent in many different areas.  Playing against one of the greatest quarterbacks of all time in Tom Brady is absolutely no excuse to give up a franchise history worst 55 points.  The secondary was terrible the entire game, and Stevan Ridley ran all over the Steelers in crucial downs in the second half when the game was still within reach.  Lamarr Woodley looked as though he did not even want to be out there for most of the second half.  Absolutely horrendous.  Defensive Grade: F

After the Oakland game last week, the only way this unit could go is up.  Antonio Brown and Felix Jones both had respectable returns and the coverage teams did a good job aside from the return by Edelman late in the game which I put most of the blame on a bad punt, rather than bad coverage.  Special Teams Grade:  B

Coaching is another area that has been disappointing throughout the entire season so far.  Anytime a team gives up 55 points and looks as bad as the Steelers do right now, the entire coaching staff needs to be evaluated.   As always, I look forward to hearing from you and the grades that you believe the Steelers have earned this week.  Comment below and/or follow us on Twitter @SteelersGab or follow me @Tylersweet87

Video: SI – Steelers And Falcons Highlight The Worst Of The First Half
What Roster Changes Could Tomlin Make For Struggling Steelers?