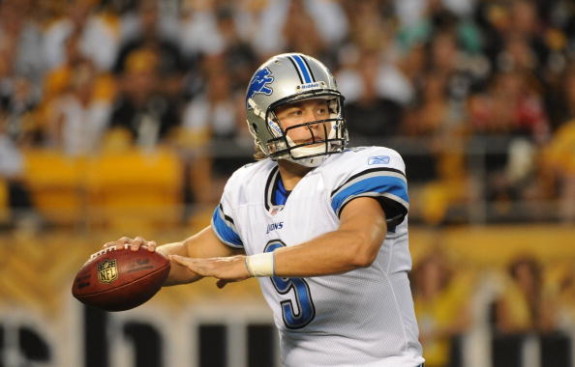 Sunday at Heinz Field the Detroit Lions are in town for the first time since the regular season finale in the Steelers historic 2005 season which eventually saw them win Super Bowl XL.

It’s a long way from that game and that season, and now at 3-6, the Steelers are simply trying to claw their way back into the race in the AFC Wild Card picture with seven games left.

Today we do a little scouting on the Lions, a team that sits at 6-3 and looks like the favorite to win the NFC North with a slumping Bears team and a beat up Packers team minus Aaron Rodgers.

1. Stafford Solid Vs. AFC – Matthew Stafford is having a very good season for the 6-3 Lions, and he’s been deadly against AFC teams, throwing for 2,686 yards (335.8 per game) with 19 touchdowns and just two picks for a 99.2 rating in his past 8 starts against the AFC. In his career, Stafford has six 300-yard passing games (including a pair of 400-yard games) versus the AFC. The Steelers have to put pressure on Stafford and can’t let him get going against a suspect pass defense.

2. Levy Dangerous On Defense – Most of the press of the Lions D goes to DT Ndamukong Suh, but one player who is Pro Bowl bound and having a career year is LB/DE De Andre Levy. He’s second on the team with 69 tackles, but has been tremendous in pass coverage, tying for tops in the NFL with a career-high five picks. Big Ben has to keep an eye on Levy at all times Sunday.

3. Comeback Kids – While they may be 6-3, the Lions are not a team that starts very fast, and have been forced it seems like week after week to comeback to win and be in games. Last week against the Bears they had to rally three times before a 21-19 win, and two weeks ago they were all but dead against the Cowboys at home before they found a way. Even if the Steelers get an early lead, with the high-powered offense the Lions possess, it’s going to be a 60-minute fight for the Black and Gold.

Is It Time For Roethlisberger To Go?
A Look Back: The 1998 Turkey Day Coin Flip Fiasco Vs. The Lions