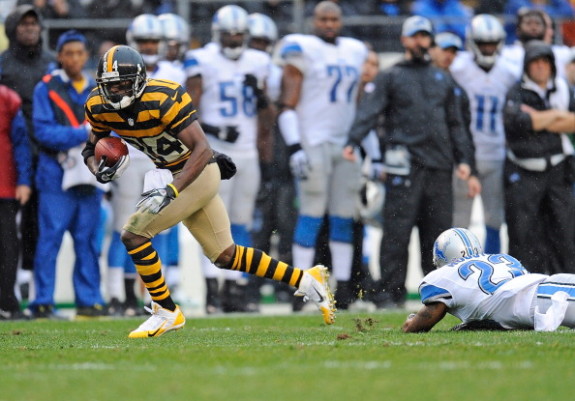 By halftime the Steelers were on pace to allow Lions WR Calvin Johnson over 300 yards receiving and QB Matthew Stafford over 600 yards passing.

Then it all seemed to change.

And with it, the Steelers pushed their season back into focus with a wild 37-27 win over the NFC North leading Lions to move to 4-6 on the year, their second straight win.

The victory was one of the most memorable in a long time – the Steelers lead 14-0, then allowed 27 points in the second quarter, and in the final two quarters outscored the Lions 17-0 for the win.

The game changed with the Lions, up 27-23 in the fourth quarter, went for a fake field goal instead of a chip shot which would have made it 30-23.

The Steelers took over at their four, and drove the distance, scoring on a pass on third down from Ben Roethlisberger to Will Johnson from 1-yard out with 4:46 to go.

After that the Steelers got a huge pick from Will Allen, and then put the game away when Big Ben hit Jerricho Cotchery on a 20-yard TD with 2:29 left to make it 37-27.

Stafford in the 27-point second quarter threw for 267 yards, but had no answers for a motivated Steelers D in the second half.

The Steelers were outgained 469 to 407, but were solid enough in the second half to get the job done for the huge 10-point win.