Has Worilds Done Enough To Push Woodley Out The Door? 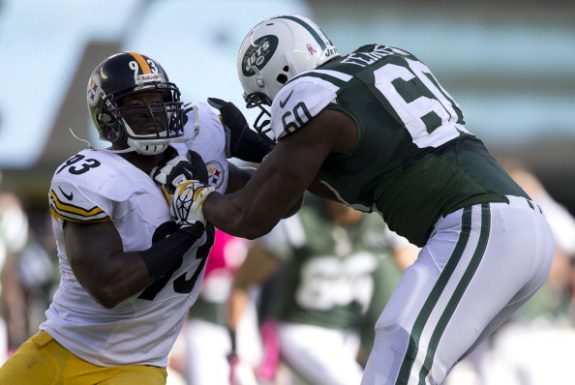 Every week it seems to get said.

LB Jason Worilds played his best game of the season this week.

The linebacker was mostly an afterthought after the Steelers used their first-round draft pick on Jarvis Jones, but LaMarr Woodley missing the past three games has opened the door for Worilds, and he’s blown it right open.

Thursday night he was again the best defensive player on the field for the Steelers, putting up 2 sacks, 10 tackles, 3 quarterback hurries and a forced fumble.

Considering in the last five games he has five sacks and lead the team team with six, the coaching staff is going to have a tough decision to make if and when Woodley is ready to come back.

Woodley is in the second year of a whopping deal that was for six years at $61.5 million, and he’s missed a number of games the past two years with injuries.

Worilds has done great on the left side, which is Woodley’s side. Right now since missing the last three games with a calf injury, the Steelers are 2-1, and the defense seems to have been much better.

It’s a tough business, and with the impending free agency for Worilds, the Steelers are going to have tough decisions to make when it comes to the future of the linebacking core.

It is a good problem in terms of having a player like Jones, who does look like he has a bright future ahead of him manning the right side.

The issue will be what to do with the left side. Does the team bring back Worilds and cut ties with Woodley all together?

Can they afford NOT to play Worilds for the rest of 2013, no matter the situation and record?

As it stands right now, he’s deserved to get a shot to show the organization if he has what it takes to do it long term.