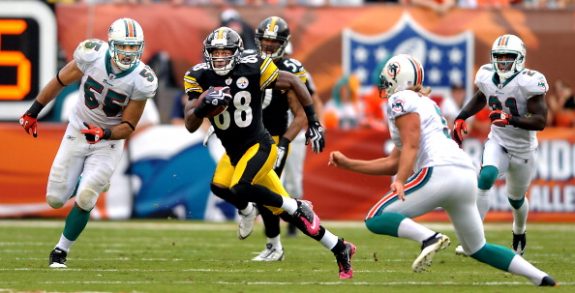 It’s do or die for the Steelers Sunday at home versus the Dolphins, as they have a shot not only to hurt Miami’s playoff shots, but also a shot to get to 6-7, and put themselves somewhat back in the playoff race.

The Dolphins haven’t played in Pittsburgh since the Rain Bowl of 2007, but are back now and looking to send the Steelers to their 8th loss of the season.

Today we look at the Dolphins, and what they bring to the table for the 1pm kickoff at Heinz Field.

1. A Young Offense Finding Their Way: The Fins offense ranks near the bottom of the NFL in terms of yards, but they are getting better in terms of scoring points, and showed it again last week vs the Jets, putting up 23 in a win. They have a young QB in Ryan Tannehill who will throw picks and make mistakes, but unlike year one, he’s being more patient and making less mistakes. Lamar Miller and Daniel Thomas lead the rush game, but the Steelers D should be able to have success against an offense that’s in flux.

2. Let The Bell Toll: If Le’Veon Bell is good enough to go, he should be able to have a decent day against a defense that seems to rank slightly better against the pass than the run. Bell has shown the last couple of weeks that fed enough, he could have the first monster game of his career. Something tells me that they will try to get him started right away, and if the line can at least give him a crack, it could be a huge day for Bell.

3. Treat The Ball With Care – The Dolphins have 16 picks over 12 games, and Wednesday Ben Roethlisberger admitted to the Miami media just how good the secondary is. “They’re really good,” said Roethlisberger, “I think people talk a lot about the front seven and those kinds of things but I look at that secondary like they’re making a lot of plays and they’re not getting beat.” The wind could be a factor, and Ben has to be careful not to give up short fields with mistakes to a secondary that has proven their worth.