Roethlisberger Says All Is Well Between He And Haley 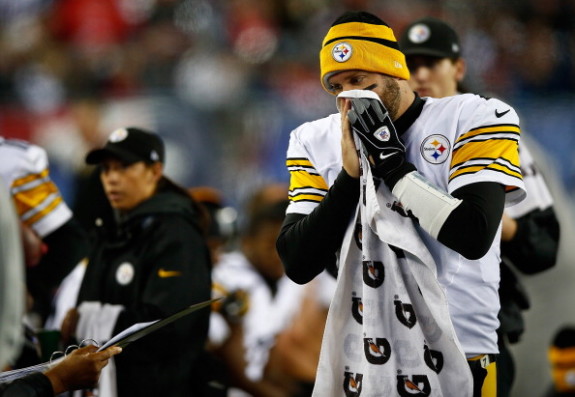 It seems that all the “issues” between QB Ben Roethlisberger and OC Todd Haley are nothing more than just made up stories by the media.

That is if you listen to the two-time Super Bowl winning QB.

Big Ben said toady on his radio show on 93.7 The Fan that he has no issues with Haley, the offense, or where it’s at.

“It’s unbelievable,” Roethlisberger said. “It gets blown up and it’s by reporters that come in there and ask the dumbest questions after a game, and it makes it ridiculous when they only take part of your answer.

“It was taken way out of context. There is absolutely no issue between Coach Haley and I. I love where this offense is right now.”

The statement that Ben is talking about was after the loss Sunday to the Fins, a question was asked on why the team didn’t run the ball more in the second half, to which the QB replied.

“Coach Haley is over there. You could probably ask him.”

Two days later, the QB says the statement was taken out of context.

“They take one little blurb of a whole sentence and it was not directed at Coach Haley, like ‘Go ask him, I don’t know why we didn’t do it,'” Roethlisberger said.

“It was, ‘He’s our coordinator, if you want to ask questions about play calling, go ask him about it. He’s the guy that calls the plays. If you want to ask me about the no-huddle and I’m calling [plays], then you can ask me.’

So if things are good between Ben and Haley, does that mean the OC actually comes back in 2013?

With another non-playoff season, the second in Haley’s two years with the team, having him back seems like a stretch.

Video: Heyward And Roethlisberger On The Loss To The Dolphins
Bengals At Steelers Wednesday Injury Report