Tomlin To Take Over The Longhorns In Texas? Not A Chance 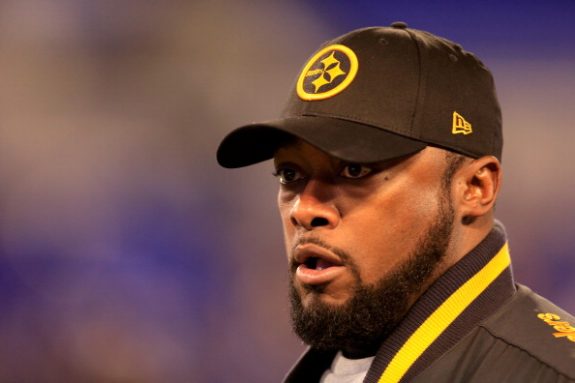 The college and NFL world is abuzz about the upcoming job opening at the University of Texas, as Mack Brown is set to leave after the teams final game against Oregon.

Many seem to think that Nick Saban, the coach at Alabama will come in and take the job, but there’s other names being mentioned, and one is that of Steelers coach Mike Tomlin.

Chip Brown, writer for Orange Bloods and SiriusXM radio host made a comment on Fox Sports Live about the opening, and Tuesday put Tomlin’s name on the list.

Other names that Brown mentioned is that of Urban Meyer, Jim Harbaugh and David Shaw.

Despite what’s about to be a second straight non-playoff season for the Steelers, it’s very hard to believe that Tomlin is going anywhere.

I’m sure that many fans (some of which comment here on Steelers Gab as well as on our Twitter account) would love to kick Tomlin out of town after another down season.

But let’s remember that Bill Cowher had 3 straight non-playoff seasons as well, and instead of firing him, the Rooney’s gave ‘The Chin’ an extension, and Cowher quickly turned the Steelers back into winners.

There’s plenty of work that lies ahead for the Steelers to try and get back to another Super Bowl, but getting rid of Tomlin or him leaving on his own is not something that’s going to get the Steelers there any quicker.

Who Do You Blame The Most For The Steelers 2013 Season?
Video: ESPN ‘NFL Live’ Picks Bengals At Steelers SNF Matchup