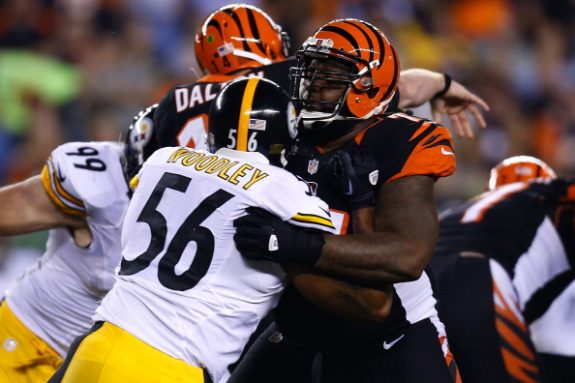 Sunday Night Football comes to Heinz Field for the second and final time this week as the Bengals come to town with the Steelers playing the role of spoilers.

Last week the black and gold were basically knocked out of the playoffs with a loss to the Dolphins, but still claim they have a lot to play for despite being 5-8.

Cincinnati is going to look to try and basically clinch the division with a win, and the Steelers are going to try and show yet again they have gas left in the tank.

With that, here’s our official game preview with who we think wins tomorrow night.

1. Shut Down A.J. – It’s easier said than done, but the Steelers have to do what they can to replay last season when in the first meeting in Cincy Ike Taylor held A.J. Green to next to nothing. If the Steelers want to win this game, taking away Andy Dalton’s best threat is the key to getting it done. Green is one of the top five in the league, and it won’t be easy.

2. Quick Throws – The Steelers have to have a game plan much like the earlier Baltimore game, when Ben Roethlisberger took two steps and had his wide out or TE’s in sight. That’s the type of plan the team needs to have Sunday night, with a good Bengals team that can get to the quarterback. Big Ben was sacked twice in the first meeting, and the line has to keep him clean in this one as well.

3. The Kicking Game – One of the big offseason pickups for the Steelers simply has to be a punter, as Matt McBride has been average at best in his time with the team. Kicking and just a few points usually seems to be a big key in these games, and missing a field goal or a bad punt could be the key to this game. The Steelers have to find a way to keep special teams issues to a minimum.

Prediction: The Steelers had their shot more than once this season to not only keep this season alive, but make the best out of it. They have failed. I don’t know if the National spotlight will do anything more to give this team a lift, as I think the way Cincy has been on both sides of the ball is enough for this to be a fight the Steelers can’t win. I think Dalton, Green, and more so that Bengals D is going to be too much for the Steelers to keep the hopes of a .500 season alive. Cincinnati 29 Pittsburgh 21