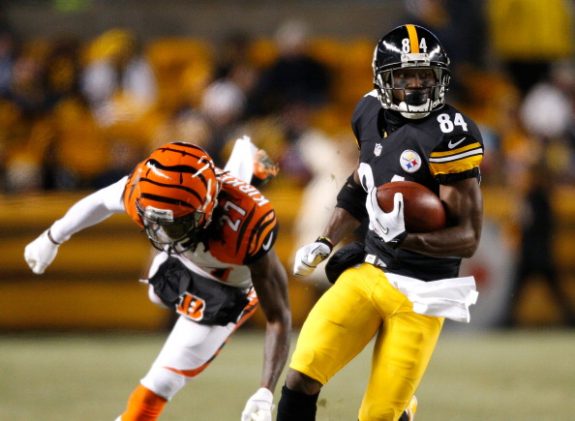 A great first 15 minutes in which they scored 21 points was all the Steelers would need Sunday night, as they played their most inspired game of the year, beating the rival Bengals 30-20 at Heinz Field.

It was the smallest crowd in Heinz Field 12-year history, as just 45,873 showed up, but that didn’t stop the team from playing hard and flying around against their rivals.

Ben Roethlisberger and the offense sparked the first quarter scoring barrage, as the team got a turnover on a dropped punt by Bengals punter Kevin Huber, and Le’Veon Bell went in from a yard out to make it 7-0 with 9:58 left in the first quarter.

With the defense shutting down Andy Dalton and the Bengals, the offense went to work for another score.

This time it was a march downfield helped by Ben’s throwing, and it ended with a 12-yard TD on third down to Antonio Brown to make it 14-0 with 2:36 left in the first quarter.

Brown went back to work on the next drive, taking a Huber punt (Huber took a shot on the play, resulting in a broken jaw) and went 67 yards to make it 21-0 with 1:12 remaining in the first 15 minutes.

The defense flew around all night, making it tough for Dalton and the Bengals offense to get anything going.

A.J. Green did have 9 grabs for 93 yards, but never had the back breaking catch that hurt the Steelers.

In the first game rookie RB Giovani Bernard had two TD’s, but he was stopped most of the night, going for just 33 yards on 13 carries.

Bell went on to gain 57 on 24 carries against a good Bengals front four.

Roethlisberger ended the night 20-for-25 for 191 yards with a TD and a pick on an attempted long ball to Emmanuel Sanders that was intercepted by Adam ‘Pacman’ Jones in the third quarter.

The Steelers QB did set a team record for the most completions by a Steelers player in a season with 338, breaking his own record of 337 completions set in 2009.

The Bengals were able to make it interesting in the fourth quarter, as Dalton marched them for a pair of scores, but a Jarvis Jones knockdown of an attempted two-point conversion with 5:46 left ended any real hopes of a Bengals comeback.

“We just told each other man let’s play for each other,” CB Ike Taylor said to NFL Network following the win.

“This season has been up and down so far, this is another AFC North opponent, so let’s go out and get a win, that’s all we tried to do tonight.”

It was a great night in front of a sparse crowd for a team that truly has been up and down all season to the point where they beat the Ravens and Bengals at home, yet failed against Miami a week ago that could have kept true playoff hopes alive.

The team needs a TON of help to get to the playoffs, plus two more wins as they will play in Green Bay next week, and then against the four-win Browns at home.

“We have two more games left, we have to go out and play some football. We have to win some ball games and let the chips fall where they may,” Taylor said.