Jarvis Jones Or Le’Veon Bell – Which Player Is Steelers Rookie of The Year? 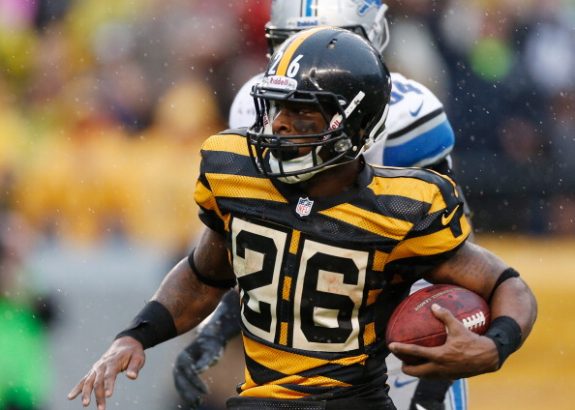 The Steelers have two players that could make a solid choice as the teams rookie of the season for 2013 – linebacker Jarvis Jones and running back Le’Veon Bell.

Jones, the teams first-round pick, made some splash plays in the preseason, but frankly during the season has shown a few moments of promise, but has yet to be the star on defense they felt they were drafting.

DC Dick LeBeau said Thursday that he’s pleased with Jones, and that he feels that he’s making progress to be a very good LB going forward.

“His out-of-position arrows have diminished. He almost is never in the wrong place now. I think the more comfortable he gets, I think you’re going to see that this guy is going to be a really good football player.”

The 6-foot-2, 245-pound Jones said he will use this offseason to get bigger as well as better to be a long-term better player.

Jones has 32 tackles this season, one sack and three passes defensed.

As for Bell, he will get more run for the ROY due to the position he plays, and the amount of TV time as well with being a running back.

He’s come on the past few weeks, rushing for 191 yards and two TD’s over the last three weeks. He ran hard vs the Ravens on Thanksgiving, maybe being the best offensive player on the field.

That night, before suffering a concussion, he ran for 73 yards on 16 carries (4.6 yards per carry) with 7 catches for 63 yards.

Bell started slow due to injuries, and the team had to lean on Issac Redmen, Jonathan Dwyer and Felix Jones to carry the weak Steelers rushing load.

The Steelers have invested a lot in Bell, and think that long term he will be the man to carry the load for the Steelers run game.

He has yet to have a career-game, yet to go over 100 yards in a single game, but has shown enough to where most will give him the nod as the ROY for the Black and Gold.