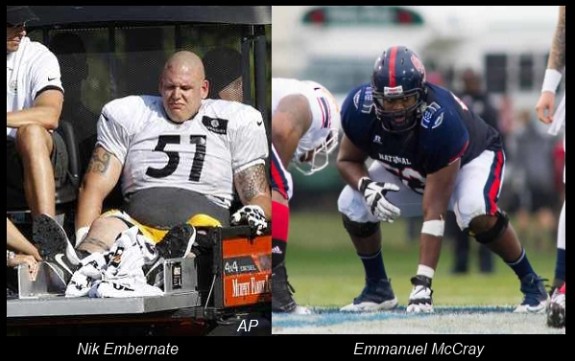 On Thursday, the Pittsburgh Steelers made four different roster adjustments during organized training activities.  Offensive lineman Nik Embernate signed with the Steelers in April of 2013 as an undrafted rookie free agent, but suffered a serious knee injury during the first practice in pads that August during training camp.  Embernate has not progressed to the level needed to play yet this season, resulting in his release from the team.

With two open spots on the roster, the Steelers signed undrafted rookie free agents Emmanuel McCray and Deion Belue off waivers.  McCray, a 6 foot 5 inch offensive lineman signed with the St. Louis Rams out of the University of Mississippi, but was released on May 15.  Belue (5-11, 182) originally signed with the Miami Dolphins out of the University of Alabama, but was waived on May 25.

The Steelers appear to be setting up a training camp competition for backup positions on both the offensive line and defensive backfield.  Whether McCray or Belue will remain with the Steelers for the 2014 NFL Season remains to be seen.