Power rankings, the Steelers and the pre-training camp drought 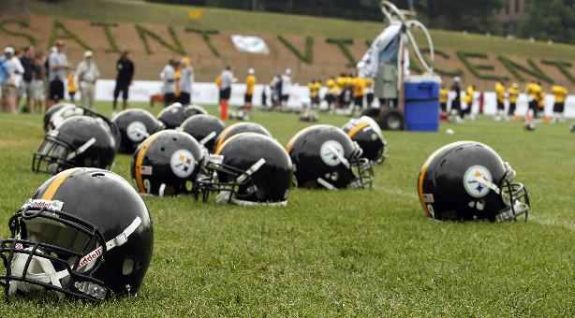 Yes, Steelers fans, it is that time of year when the offseason has officially ended, power rankings become the topic of conversation and those who love football start chomping on the bit due to a drought of “news” in favor of talk of expectations and predictions. It can cause a bit of overheated dissertations (hot air) and is usually fraught with evolving speculation between fans, media, players and everything in between. To alleviate any potential pain you may be feeling, let’s step out of the sauna for a moment and let in some fresh air.

In a chat session conducted on Sunday, a lot of questions were posed about what to expect when training camp begins on July 24.  Other than the typical antics many players are involved in (remember Brett Keisel arriving in a tractor?), positional battles will be the main thing to keep an eye on.  The Steelers not only want to improve, but are expected to improve in 2014, period.

While many in this year’s draft class had good showings during offseason workouts, they have yet to prove they are completely ready to take on a starting role. Some may not be ready to take on a backup role.  They will be given stiff competition by undrafted rookies, free agents and veterans alike – all in an exercise to earn a spot. Head coach Mike Tomlin has expressed his feelings many times over that no one, not even a veteran, is guaranteed a starting position (or any position) unless it is earned.

Let’s look at some of the questions submitted and the subsequent discussion(s).

Mark in Miami: I am not sold that our linebackers are going to be as effective as some have predicted. Who do you think may come out of the pack and really define themselves at camp?

Rivers: This is a great question because the depth, especially at inside linebacker has been questioned and no clear leader has yet emerged as the answer. With Sean Spence having seen little time on the playing field due to injuries the past two seasons, it may be a make or break camp for him.  Vince Williams became a starter and is now struggling to ensure a spot on the roster.  Jordan Zumwalt has had trouble picking up on the plays in the playbook but is reportedly working on it. The inside linebacker spot absolutely will be a highly contested area during camp and at this point, I am not able to predict who will emerge as the go-to guy.  I am looking forward to seeing who gets in there and mixes it up as much as you are.  I can say that I think the spot is open for the taking by the guy who shows up at camp in great shape, ready to go and grasps LeBeau’s defense the best. That may seem like an obvious response, but it’s the best I have right now.

Yinzerholic: What do you think of all of the different power rankings out there, including from fantasy football sites and magazines and do you use them?

Rivers: Admittedly, some of the rankings out there are more accurate than others simply because those who are providing them are more educated on specific teams and players.  As for fantasy football, I have never been very successful in the leagues I have participated in where I followed rankings instead of my own research.  Overall, I tend to avoid offering rankings of my own because there are so many variables that can change between what is predicted before camp and actual regular season play.  Last season saw a lot of those early rankings go right in the toilet as several running backs seemed to fall (due to injury) like a stack of dominoes.  I feel more comfortable with post-camp and post-preseason rankings, week to week, but that is just me. And I never put money on any fantasy league – ever – because I just don’t like the odds of a gamble with too many possible outcomes.

Yinzerholic: So are you saying power rankings are useless?

Rivers: I am saying that I consider the source and that they are guides to possibilities. I won’t go so far as to say they are probabilities.

DJ:  You predicted before the 2014 Draft that the Steelers would go after a running back in the draft…I saw your Facebook prediction. The Steelers did even though a lot of people thought it was a bad decision and you took some heat for even suggesting it. What made you think they would or why did it make sense?

Rivers: Thank you for reminding me of a traumatizing situation on social media (joking). With the Rooney’s statements in 2013 about a need to instill a running game in Pittsburgh again swirling in my memory pre-draft, I felt it made sense for several reasons. One being that although Le’Veon Bell established himself at the position, even the coaching staff seemed relieved to see Mendenhall and Redman go. After all, both had been benched for poor ball control. When LeGarrett Blount came in as a free agent, that still left a hole at the third position when the Steelers didn’t mind losing Dwyer either.  Two, even with Bell as their primary ball carrier, Blount and Bell alone would most likely not be able to sustain the workload that the Steelers offense appeared to be moving toward. That meant the team needed to find at least one more back – and the draft provided a player they liked. Dri Archer can come into camp and prove himself as other guys, like Jordan Hall, push him to earn that third spot. Nothing is guaranteed. I basically made my prediction based on information gathered and pure gut instinct. No magic 8 ball here.

Kay Carpenter: I am concerned about the defensive backfield. The Steelers really danced around it in the draft and now camp is nearly here. Who is the answer out there?

Rivers: I am not sure it is the “who” but the “how” that will be addressed at camp. Carnell Lake was brought in to help Coach LeBeau and they’ve both said that they are comfortable with the guys currently on the roster. Could that change? Sure. I think camp will be good for the guys in the defensive secondary because they can bring guys in and out of different packages and see what works best (“how”) in each situation.  Depth is definitely a concern should someone get injured, but I am anxious to see how the Steelers may plug in Brice McCain, for example.

Dennis G: But can the guys we have at corner compete in games in the pass happy NFL we have now?

Rivers: I won’t give a 100% seal of absolutism, but I am confident that if the defensive line and linebackers become effective at disrupting opposing offenses, especially by increasing sack totals, the corners will have less pressure to have to make plays to save games. That isn’t to say they will be able to pick dandelions out there if Timmons or even Jarvis Jones get hot.  It is going to take solid teamwork and communication. The blame game has got to go. Step up and put in a full effort and then I think we’ll be a lot less worried about exposure in the defensive backfield.

Rivers: A bit premature to say before we see what happens in camp and who makes the 53-man roster, but I will say I think the Steelers have the potential to be able to win ten games this season. Remember, I reserve the right to change that if things (crossing fingers that this will be healthy training camp) take a strange turn. Are Pittsburgh’s 8-8 seasons over…right now I can only be optimistic. Get back to me after camp.

Want to talk more about this chat session and give your own opinions or insights? Click here and join the discussion at gridironchatter.com

Steelers’ Wheaton is catching Up And Moving Ahead
Video: Fox Sports On Three Key Fantasy Players In The AFC North In 2014