Cam Heyward: Holding Up His End 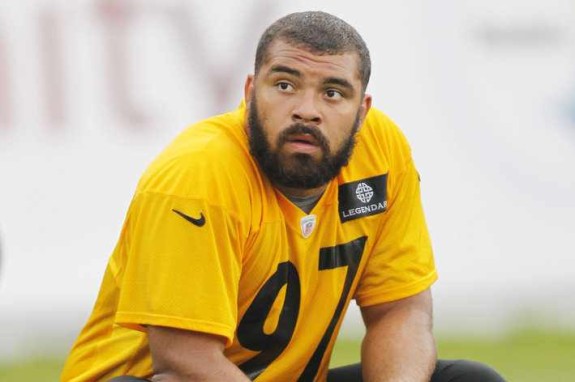 Cameron Heyward is projected to start at defensive end this season. From backup to starter, Heyward has always been a player to watch since his days at Ohio State. Now that Heyward is the clear-cut starter, he will be expected to really break out. Heyward possesses an impressive blend of size, strength and agility.

In college Heyward was so dominant, he could not be blocked one-on-one. The double-teams he attracted garnered the attention of opponents, scouts and the NFL. At one point Heyward was considered the highest-rated defensive lineman of his 2011 draft class by draft expert analyst Mel Kiper, Jr. Despite the attention he received from opposing linemen, Heyward still managed to record 15 sacks in college. When drafted in the first round of the 2011 NFL Draft by the Pittsburgh Steelers many thought he would impact from day one. Indeed he did.

In three seasons,  Heyward has played in every one of those games, proving that he is reliable. In the third game of the 2013 season Heyward replaced former teammate Ziggy Hood in the starting lineup and never relinquished that spot. Heyward went on to record 5 sacks, 2 forced fumbles, 59 tackles and 31 quarterback pressures – very impressive numbers for a 3-4 defensive end.

Heyward will be counted on to increase those sack,and quarterback pressure numbers. With a faster defense to play with this season, Heyward will be given more chances to rush the passer. Heyward could very well record double-digit sacks this season. The Pittsburgh Steelers have not had a consistent pass rushing end since Aaron Smith left town. Heyward, who is entering a contract year, will be extra motivated to have a big year. If he performs wel,l expect The Pittsburgh Steelers to offer Heyward a contract so lucrative that he will commit to being a Pittsburgh Steelers for the rest of his career.

Between the Hashmarks: July 11 transcript
Steelers tight ends will see more action in 2014