James Harrison Makes It Official – Retires A Member of the Steelers 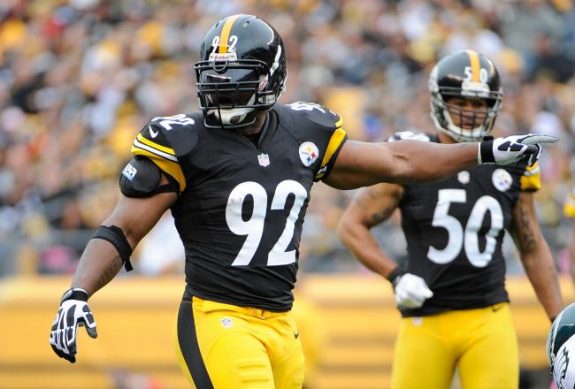 Leave it to James Harrison to lay down his own ground rules at his final press conference as a member of the Black and Gold.

“If y’all looking for tears,” Harrison said to the handful of former Steelers teammates who attended his retirement news conference, “you ain’t going to get it.”

Friday did it, like so many Steelers players before him, did it the right way, retiring as a member of the team he had his greatest success with.

The 2008 NFL Defensive Player of the year announced late last week he was walking away from the game that made him, at times, the most hated man in the sport.

Harrison didn’t find instant success in the NFL, he was cut four times before he finally was able to stick with the Steelers, but once he did, he became great.

Among many of the huge hits in his career, his most memorable play will go down as the one that was a huge part of the Steelers last title in 2008, as he took a Kurt Warner pass and returned it 100 yards for a touchdown to end the first half in the eventual Steelers 27-23 win over the Arizona Cardinals.

“It’s really family here and I wanted to come back and finish it off where it started,” Harrison said.

A year ago it was a different story, as Harrison was released by the Steelers in March of 2013, and he went on to play a mostly quiet season for the rival Bengals.

He shopped his services around in 2014, but found no takers, his closest job coming with the Arizona Cardinals, a team coached by former Steelers OC Bruce Arians.

Harrison’s final presser was capped off by his future plans, which include going after a career in real estate, as well as raising his two boys.

Not a bad way to go out at all for the always intense Harrison.