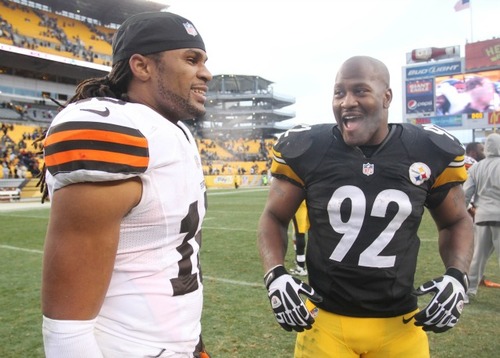 James Harrison had a fruitful career for the Steelers, and it seemed like two weeks ago it was over when he stood in front of Steeler Nation and announced he was retiring.

How injuries can change things.

Harrison is coming back, as he’s set to meet with Steeler coaches on Tuesday and will be in uniform on Sunday when the Steelers play the Bucs.

With Harrison coming back, let’s take a moment to reflect on some of the more memorable ones that he had in his black and gold career.

5. Leaps and Bounds – Early in his time with the Steelers, Harrison didn’t play a lot, but made a sensational play vs the Chargers on a Monday night in 2005. He picked off a pass and then like a track and field star, leaped over Bolts RB Ladainian Tomlinson. It was a sight to behold.

4. Knockout Punch Of Browns – Harrison was the 2008 Defensive Player of the Year, and in 2010 he took it upon himself to lay two huge blows in an October win over the Browns. The first was on WR Josh Cribbs, and the second, an even more vicious hit of WR Mohamed Massaquoi. The hits were discussed on shows for days after.

3. Burying the Ravens – Harrison took it upon himself to have the game of his career vs the late Steve McNair and the Ravens on October 5th 2007. Look at the stats – 10 tackles, 3.5 sacks, 4 forced fumbles, 2 STF for 12 yards, 1 interception returned for 20 yards, and one pass defensed. He was by a wide margin the best player on the field that night in the Steelers 38-7 runaway win.

2. Taking Out a Drunk – Once again, Harrison beat up the Browns, but only this time it was a fan. A drunk at Browns Stadium decided he would take a stroll on the field during a game on December 24, 2005 while the Steelers were rolling to a 41-0 win, and Harrison, still a spot player for the team, picked up the drunk and slammed him like a WWE star.

The drunk got put in jail, and the picture of Harrison doing a takedown is a thing of beauty. The fan sobered up and found God, so everyone won in the end.

1. The Immaculate Interception – Everyone that is a Steelers fan knows the story, they have seen the play, and even after seeing it 1000 times it still gives may goose bumps. The play is the 100 yard interception in Super Bowl XLIII – by far the longest in Super Bowl History.

The Al Michaels call is still one of the greats in Super Bowl history, and while Santonio Holmes won the game with a pass catch, Harrison saved it with a TD to put the Steelers up at half 17-7.

Steeler Fans Share Your McDonald’s Experiences for a Chance To Win Prizes!
Video: Ed Bouchette & Gerry Dulac of the Post-Gazette Talk On the Steelers Win