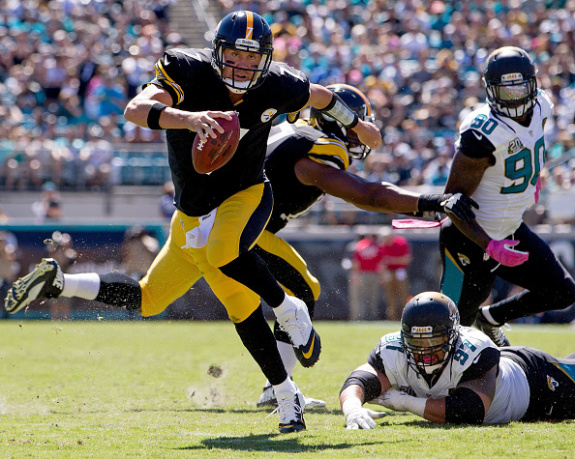 It wasn’t pretty to say the least, but with the way last Sunday ended, the Steelers will take a win anyway they can get it.

The black and gold got a solid outing from their defense, pulling off a huge pick six that helped them get to 3-2 with a 17-9 win over the still winless Jacksonville Jaguars.

The victory ties them with the Ravens for second in the AFC North, as Baltimore lost to the Colts in Indy.

The win also sets up a big AFC North game next Sunday against the 2-2 Browns in Cleveland, as the Browns seemed destined to go to 1-3, but rallied down 28-3 to beat the Tennessee Titans on the road 29-28.

Brice McCain pulled in the biggest Steelers defensive play of the year, taking a Blake Bortles pass and going 22 yards the other way, turning a 10-9 Steelers lead into a 17-9.

McCain stepped in front of receiver Allen Hurns early in the fourth quarter, Bortles’ wobbly sideline pass and went untouched the other way.

The play was needed, as an offense that looked on paper like it could dominate, was average at best.

They put up a touchdown and field goal against a Jags defense that was terrible entering the contest. Ben Roethlisberger completed 26 of 36 passes for 273 yards, with a touchdown.

The only Steelers offensive TD came when he threw a 1-yard scoring pass to tight end Michael Palmer late in the second quarter.

It looked as if the offense was going to get the team to 17-9, but Roethlisberger fumbled deep in Jags territory, but the team was bailed out when McCain pulled in the pick six.

Le’Veon Bell had 82 yards rushing on 15 carries, and Antonio Brown finished with five receptions for 84 yards.

Heath Miller added three catches for 46 yards a week after hauling in a career-high 10 passes.

It was a day for the defense though, as they held the Jags to a total of 246 yards, a number they are going to have to get near duplicating if they want to beat Cleveland next Sunday.