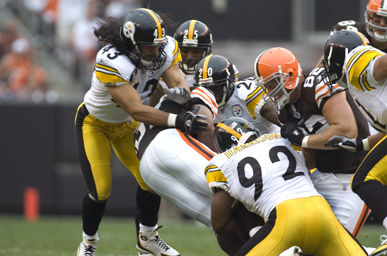 The Pittsburgh Steelers have seen plenty of frustration during the 2014 NFL Season, but Sunday’s game against the Cleveland Browns on the road was their arguably their ugliest despite former losses.  The Steelers were able to get down the field early in the first quarter to put a field goal through the uprights only to find themselves getting deeper and deeper into trouble as the game continued.  The result was a loss to a Cleveland Browns team that has been hungrily improving, suffering losses and earning wins by just single digits.  The Steelers had no answer to what Brian Hoyer was able to throw at them, leaving them looking desperate with a  31-10 final score.

The Steelers were able to get the running game firing early.  Le’Veon Bell had a 12-yard run on a third-and-three that helped move the ball downfield.  When Browns defensive back Buster Skrine was called for a 24-yard pass interference penalty, the Steelers were able t get the ball on the seven-yard line, but were not able to correct their red zone woes, settling for a field goal by Shaun Suisham.  The Steelers defense was able to keep Cleveland from scoring.

In the second quarter, the game got away from Pittsburgh.  Hoyer led the Browns on two offensive series that put 14 points on the scoreboard.  Isaiah Crowell had a five-yard touchdown rush and then Jordan Cameron caught a 51-yard touchdown reception.  As the Steelers looked for offensive answers, the Browns again marched down the field on 11 plays for 85 yards and scored their third touchdown on an eight-yard rush by Ben Tate.

With near zero offense, the Steelers defense was forced onto the field for nearly the entire second half of the game.  They were able to hold the Browns to a 40-yard field goal by Billy Cundiff in the third quarter, but fell apart as the Browns used Tate to eat up the game clock and earn yet another touchdown off of a one-yard rush following a questionable interception call on a batted Ben Roethlisberger pass.  The Steelers were able to put seven more points onto the scoreboard on a five play, 74-yard series that highlighted a key 17-yard reception by Antonio Brown.  Roethlisberger was able to hit Lance Moore for a 26-yard touchdown pass, but it was too little, too late.

The Steelers have played ugly nearly the entire season, but the loss to the Browns may have shown just how inadequate Pittsburgh is in the league this season.  Some could argue that losing to a team like the Carolina Panthers who hadn’t won a single game until meeting the Steelers was terrible, but the loss to the Browns has to hurt worse and showed significant breakdowns in nearly every aspect of the game.   The Steelers looked unprepared, were unable to make any adjustments at halftime and failed miserably.