How The Two Big Backs Can Propel The Steelers To Victory 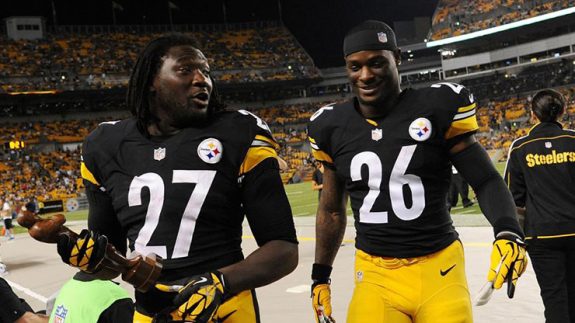 Strong performance from Le’Veon Bell and LeGarette Blount will be needed to defeat the Indianapolis Colts this Sunday. These two running backs have had their moments this season and both will need another solid game in order for the Steelers to be victorious.

The Colts run a 3-4 defense with it’s nose tackle being former Alabama standout Josh Chapman. If Chapman can not command double-teams this Sunday, it will allow Bell and Blount to gain positive yards in the teeth of the defense.  If the Steelers can attack the middle of the defense by running the football well, it will open up one-on-one coverage at wide receiver for Antonio Brown and intriguing deep threat Martavis Bryant.

Many fans remember when Blount rushed for 189 yards and four touchdowns against the Indianapolis Colts in the 2014 divisional playoff game. The Colts certainly have not forgotten.  Blount is a running back who excels as an inside-out runner. Despite being 250 pounds, Blount has the quickness and acceleration to run past corners.

Bell this season has shown a rare ability to consistently display power and be elusive.  Bell is also a threat in the passing game, opening up more options for Ben Roethlisberger.  He has good burst speed once he has passed the line and has set a team record for rushing in the first seven weeks of the 2014 NFL season.

Indianapolis has a fast defense who can cover speed backs sideline to sideline. The Colts proved this last Sunday as they shut down Cincinnati Bengals all-purpose running back Giovanni Bernard.  One of the better ways to slow down a fast defense is by running delays, screens and trick or specialty plays. Bell and Blount both fit the mold when it comes making plays when they have defenders who are over-pursuing them.

When in the red zone, the Steelers will most certainly have either Bell or Blount in the game and both will likely receive several touches in that area of the field. Efficient running from the Steelers along with their ability to move the ball up down the field translated to 20-30 points against J.J. Watt and the Houston Texans. Those points will be needed facing a hot team such as the Colts led by Pro Bowl quarterback Andrew Luck.