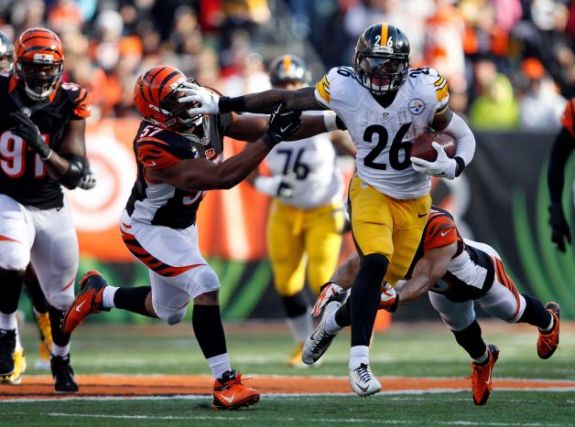 Le’Veon Bell’s performances week after week have been steadily improving to the point that Bell not only helped the Pittsburgh Steelers completely dominate the Cincinnati Bengals, but have NFL experts raving about him.  In only his second season, Bell has become a dominating rusher and exceptional receiver.  He is the type of weapon on offense the Steelers have needed for quite some time.

ESPN.com said of  Bell: “(He) burnished his candidacy for the NFL Most Valuable Player Award by joining the late, great Walter Payton in a most exclusive club”.  By piling 235 rushing yards up against the Bengals, his third consecutive game with at least 200 all-purpose yards, the only player in the National Football League to have done so is Walter Payton (who did it in 1977 with the Chicago Bears).  So, is Bell the new “Sweetness” of the league?

“It’s an honor to be mentioned with a guy like Walter Payton,” Bell said following his performance against Cincinnati.  “I’ve heard a lot about him.  Obviously, I haven’t seen a full game of how he runs, things like that, but I’ve seen a lot of highlights.”

What is funny about Bell’s statement is that many of us remember seeing Walter Payton play live.  And after being compared to the Hall of Famer, Bell may want to make watching some tape of the famed rusher a priority.

Bell’s 1,231 rushing yards at this point in the season is second only to DeMarco Murray of the Dallas Cowboys.  His 71 receptions set a franchise single-season record for most catches by a running back.  This week, Bell was named AFC Offensive Player of the Week and his contributions to the Steelers isn’t going unnoticed.

“(Bell) is a special talent,” said quarterback Ben Roethlisberger.  “I’ve said for many, many weeks now that he’s one of the best all-around backs in the game.  You don’t see a guy that takes pride in catching the ball and pass-blocking and picking up blitzes like he does.  I’m just proud of the way he’s grown every week.”  That is a big difference between how Roethlisberger felt, initially, about his teammate during Bell’s rookie season.  Roethlisberger was concerned Bell wasn’t picking things up quickly enough.  By the end of the 2013 season, however, Bell had surpassed Isaac Redman and every other running back on the Steelers roster, carrying the load and showing he was a quick study.

Bell is definitely on pace for the NFL MVP award and has proven that he has the right attitude towards carrying what many felt would be too big of a burden as the Steelers’ main rusher.  One can only watch how he patiently approaches holes created by an improved Steelers offensive line, gliding rather than making harsh cuts, to see that Bell is aware of what is happening on the field on any given play.  His tap-tap footwork has stopped defenders in their tracks allowing Bell to take advantage of their hesitation.  Like Payton, Bell isn’t afraid to get vertical if necessary and has proven elusive, often scooting out for extra yardage when by all appearances he is at the bottom of the pile.  The Steelers have the making of a phenomenal player and it’s no wonder that Bell has become the talk of the NFL in 2014.

And in case Bell needs additional motivation, which we doubt he does – we’ve included a little Walter Payton action to give him yet another aspect to his game.