Mike Tomlin’s Comments After the Win Over Kansas City 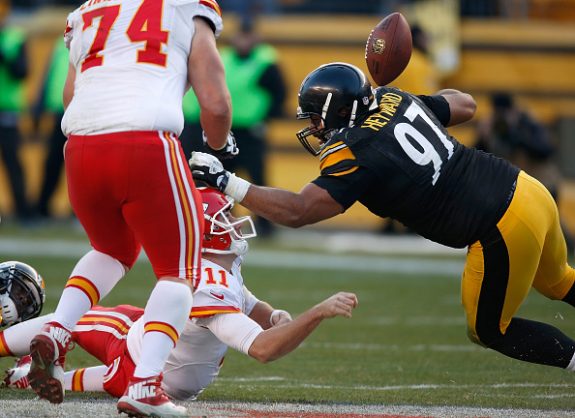 Head Coach Mike Tomlin: (It was) a big fight by our football team today. (We) did what was necessary to secure victory. A lot of efforts to point out. Really just loved the spirit of the defense. We challenged those guys this week. Kansas City has the number-one red zone defense in football so we knew that points could be tough down there for our offense. Our defense had to play tough in the red area to keep the playing field level. I thought that they responded to that challenge. We talked openly about it all week. The red zone stops where we forced them to kick field goals and then ultimately that fourth-down stop was big in the football game from a big perspective. Just largely, a lot of good efforts by a lot of people. (We) came out of this thing relatively injury free. We realize what next week is. It’s a big week for us. We’ll enjoy this today, but we’ll start the preparation tomorrow for our AFC North finale.

Were you surprised that the Chiefs went for it on fourth-and-one? How did you stop them?
I was not surprised. Coach (Andy) Reid is an aggressive guy. He doesn’t live in his fears. He’s always been that guy. Nothing special in terms of stopping it to be honest with you. (We) just played good, sound football and guys did a nice job of being strong at the point of attack.

What does it say for your team to make the playoffs despite playing young guys and dealing with injuries?
The big thing is that we’ve evolved throughout. We were young at the early stages of the year. Same guys but they’ve matured through the process. That maturation process is sometimes not easy. We were a highly penalized group early. We got control of that. Started minimizing big plays. We’re doing what teams need to do this time of year which is ratcheting it up and being a more difficult team to beat. We’re beating ourselves less which is good.

Was the plan at right outside linebacker to have a rotation and did the performance of James Harrison change that?
James was healthy today. We were going to let James play and we did. He was a significant factor but obviously all of those guys are capable of being reasons why we win. That’s one of the things that the challenges that injuries present. When you come through the other side of it you get people back (and) you have quality depth. We’ve missed some time with a number of people, Jarvis (Jones) and James Harrison and so forth. But what that’s given us now is that we have everybody healthy. We have good depth and we can play a lot of people and guys can play with great energy.

How important would it be to win the division?
(Laughing) Very. I mean that’s what we came here for is hardware that we pick up along the way in terms of our ultimate goal. But we realize how significant division play is. We’re supporters and proponents of division play.

Did you get an explanation on the William Gay unsportsmanlike penalty?
I don’t even want to get into that. I really don’t. Ridiculous.

Re: Your team’s discipline:
We’re not going to apologize for caring. We’re not.

Would you say that this was your team’s best defensive effort of the season?
I could say that because as we sit here right now those are the feelings. But we’re just trying to do what’s required for us to win. It was very necessary today. We’ll appreciate it today. I’m sure we have some bigger, tougher challenges and battles that lie ahead. That need to be our focus as opposed to looking back and admiring our work.

What has the return of Harrison meant to the team?
Besides the play, the demeanor, the approach to business, the singular focus; he’s a legitimate, real leader for the group. Besides the play, he’s a compass. He’s a football lover.

Does it mean more to make the playoffs this season after missing it the last two seasons?
No. We don’t carry bags from past performances. We’re singularly focused on this one.