Can Steelers’ Josh Harris Come Through Under The Bright Lights? 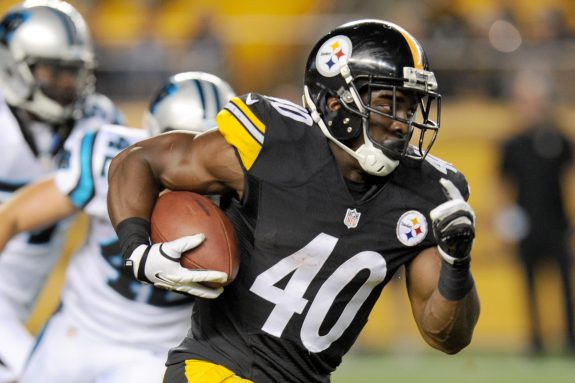 Running back Josh Harris of the Pittsburgh Steelers is in line to start this Saturday night if star running Le’veon Bell can not go. Harris, who was activated from the practice squad after LeGarrette Blount was released in week 11, could easily go from  largely unheard of to the talk of the NFL.

Harris played briefly last week against the Cincinnati Bengals and ripped off a 59-yard run that was negated by a penalty. One of the several positives of Harris receiving more carries is that he possesses great breakaway speed.  Considering how well the Baltimore Ravens and Steelers know each other, statistics only matter so much when any player who can make explosive plays stands out in these types of games.  Another positive is that the last time these two teams met Ben Roethlisberger threw six touchdowns and the Steelers did not need a mind-blowing performance from Bell.  With the playoff experience that Roethlisberger has, Harris will not have to carry the offense, and even though Harris doesn’t have any playoff experience, neither does Bell.

The main negative is that it is unclear how well of a receiver Harris can be. If this game turns out to be a defensive game, Harris could receive plenty of check-down options.  Another question mark will be how well Harris has performs in pass protection. It is a guarantee that the Ravens will blitz often to try to prevent Roethlisberger from getting into a rhythm early, so Harris will be tested by linebackers blitzing up the gap, including traditional pass-rusher Terrell Suggs .

Due to the recent signing of Ben Tate, it is unclear which running back will handle short yardage duties. If Harris can gain steady yards and not turnover the football, it will allow Roethlisberger to work the short to intermediate passing game and then take shots down the field whenever the Steelers choose. Harris does not be the star for the Steelers to win the game, but a steady effort will be needed.