The Growth of Stephon Tuitt 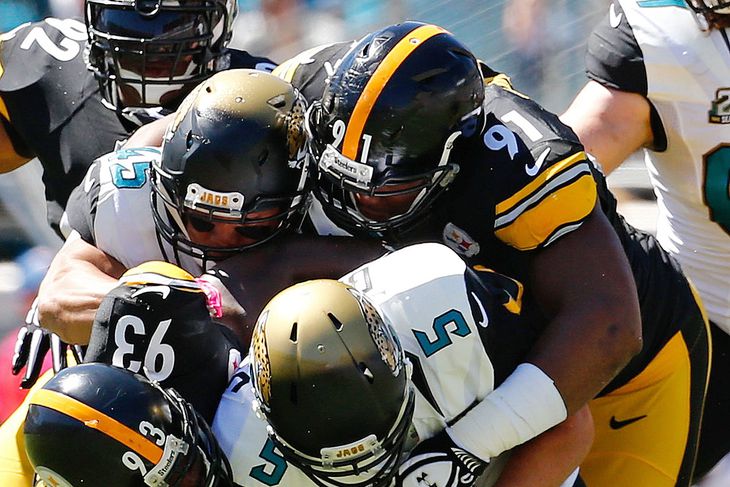 In last May’s draft with the 46th pick, the Pittsburgh Steelers selected Stephon Tuitt from Notre Dame. Tuitt had a stellar career with the Irish and was expected to be drafted much higher but he had an injury that made his stock drop. He fell to the Steelers in the 2nd round and they were ecstatic that he did so.  The second round pick was expected to provide an immediate presence to the defense.  Tuitt’s first year was more of a learning curve, trying to get adjusted to the speed of the NFL and mastering the complex 3-4 alignment that the Steelers employ.

Brett Keisel was re-signed to help ease the transition and to take pressure off of Tuitt. In his rookie season, Tuitt recorded 17 tackles, one forced fumble and a single sack;  and though those numbers weren’t earth shattering, he is on the cusp of greatness.

Keisel ended up hurt and with the disappointing play of Cam Thomas, Tuitt was inserted into the lineup in the second half of the season. Tuitt more than held his own and it was rather ironic that the defense played better when he got more reps and learned the nuisances of the pro game.

This offseason might be one of the most crucial in recent Steelers history, especially on the defensive side of the ball. Pittsburgh needs Tuitt to develop into a great player with so many others concerns in their defense. With the uncertain future of Thomas and Keisel, Tuitt will be counted on for more of a spark.

2014’s total team defensive numbers were one of the worst statistical seasons since Dick LeBeau had coached the unit. LeBeau and the Steelers came to a mutual decision to part ways and longtime linebacker coach Keith Butler was hired to replace LeBeau. The Steelers defense has transitioned over the years from a veteran group of older guys to a youth movement.

At the tender age of 21 and at 6’6″, 304 lbs.,  Tuitt is built like a man child and has the physical ability to be the next great defender in the form of Pittsburgh’s great tradition. The Steelers invested early picks on Ryan Shazier, Jarvis Jones and Tuitt – somebody from this group has to turn the corner in order for the Steelers to go far. Draft picks can’t usually be deemed by success or failure into at least 3 to 4 years after being selected, but if there is any early indication it may be that Tuitt has the makings to be the best out of the bunch. Pittsburgh’s fate might be determined but the 2nd year growth of Stephon Tuitt.