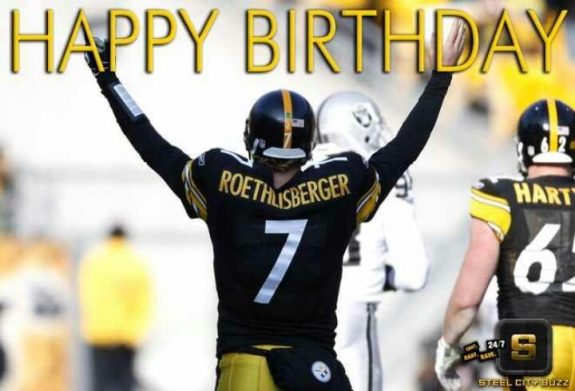 March 2, 1982 as the Steelers were coming off a tough AFC Playoff loss to the San Diego Chargers, the Roethlisberger’s were celebrating the birth of the man that would lead the Steelers to championship wins 5 and 6 some 23 and 26 years later.

Yes today is the day of the birthday of Steelers current and one day Hall of Fame QB Ben Roethlisberger. Born in Lima, Ohio, ‘Big Ben’ turns 33 today, and while Steeler Nation still waits for the team to give him a deal that should allow him to retire with the team, today we look back and celebrate some great moments the QB has had with the franchise.

Ben beats the Packers 2009 – Ben hits Mike Wallace on the final play to beat Green Bay in a memorable game at Heinz Field.

Ben hits AB to burn the Ravens – Ben and Antonio Brown convert a 3rd-and-19 in the playoff showdown in 2010.

‘Mean’ Joe Greene: The Best Steelers Player There Ever Was
“Game of My Life: Pittsburgh Steelers” Now Available for Pre-Order on Amazon!