‘Mean’ Joe Greene: The Best Steelers Player There Ever Was 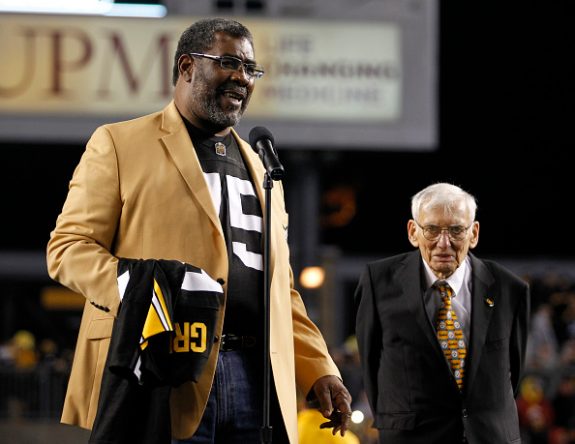 The Pittsburgh Steelers for years has been an organization that’s built its reputation on defense. You will be hard pressed to find a franchise that’s can compare to defensive stars that the Steelers developed. From the likes of Joey Porter, Jack Lambert, Jack Ham,Rod Woodson, Mel Blount, Greg Lloyd, Troy Polamalu, and LC Greewood the list goes on.

Pittsburgh has 23 players in the Hall of Fame if you count Jerome Bettis but no one was better than ‘Mean’ Joe Greene. The Steelers were perennial losers before they selected Greene with the 4th pick in the 1969 draft. A franchise that was the laughing stock of the league and a complete joke.

The Front office was ridiculed for picking Greene in 1969. He came from a small school North Texas state and the local media referred to Greene as Joe who? Joe quickly gain noticed because he constantly beat lineman even though he was often doubled and triple team. Mean Joe set the tone for the Steelers defense with his mean and aggressive play.

Joe wanted to win so bad that he often let his temper get the best of him. Greene was even rumored to challenge Dick Butkus to a fight and Butkus is known as the toughest player to ever play the game. Green was a first ballot Hall of Famer, The defensive player of the year twice, Defensive rookie of the year and first team AFC 11 times but besides the accolades what made him special is his heart and leadership.

You talk about great leaders but Joe Greene might have been the greatest leader and team player in sports history. When Lynn Swann got injured with what appeared to be a dirty hit in the 1977 Championship game it was Greene who ran on the field and carried Swann to the sidelines even though he had a back injury of his own just so the team wouldn’t lose a time out. He demanded and commanded respect from everyone.

He pushed the rest of the Steelers to be great and wouldn’t tolerate anything less. It’s a long list of greatness when you think of the Steelers franchise but when it comes to the Greatest Steeler of all I vote for Mean Joe Greene. If Greene was never selected the Steelers tradition of great players may have never existed.

The great thing about sports is you will never know how things will turn if certain conclusions are different. I can safely say that The Steelers would have never won 4 Super Bowls without The Greatest Pittsburgh Steelers of all time.