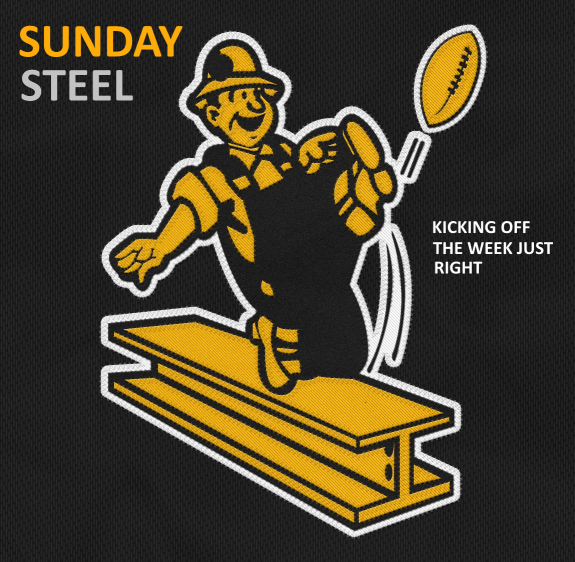 Because the offseason is one of the most grueling time periods for those of us who are already missing professional football, the Steelers Gab team would like to start the week off right by introducing you to a new feature: Sunday Steel.  Each Sunday throughout the offseason, we’ll have different guest interviews, post questions that you the fan can answer on our Facebook page, polls, Steelers rumors, Steelers news and trivia and more.  We’re just as depressed as you are, scrolling through the channels on television trying to decide if we’re hockey fans or not, wondering if it’s okay if we’re still wearing a Steelers jersey on the weekends.  Sunday Steel isn’t about being serious – it’s about us wanting to reach out to you in fun, new and sometimes unexpected ways. So Steelers Gab readers and Steelers fans, be prepared to be given at least a little black and gold to pump up the beginning of your week.

Tidbit: “Steelmark (the hypocycloid geometric shapes in the Steelers logo) highlighted the attributes of steel, with yellow representing “lightens your work”, the orange denoting “brightens your leisure” and the blue meaning that steel “widens your world”. The definition of the logo components was updated to represent the three materials used to produce steel, with yellow for coal, orange for iron ore and blue for scrap steel.

In this section we reached out to four Steelers insiders/experts to answer top questions submitted by Steelers fans this past week.  Our guests were Shawn Bell, Robert E Smith, Jr., Darryl Badham and Matt Vargo.

Question 1:  NFL.com currently has Jason Worilds (OLB) ranked at number 12 on the free agent market.  Is he ranked too high, too low and should the Steelers stick the franchise tag on him and wait and see if he produces in 2015?

Question 2:  Is Jarvis Jones a bust if he doesn’t improve during the offseason and where do you think he needs to improve?

To see the rest of the questions and answers go to our forum at GridironChatter.com and sign in for free – CLICK HERE

Meme of the Week

Poll of the Week

Fan Question of the Week

“Will James Harrison go to Tennessee to play under Dick LeBeau?”

Feel free to answer this question in the comments field!

9 Years Ago Today the Steelers Celebrated Their 5th Super Bowl Title
‘Mean’ Joe Greene: The Best Steelers Player There Ever Was