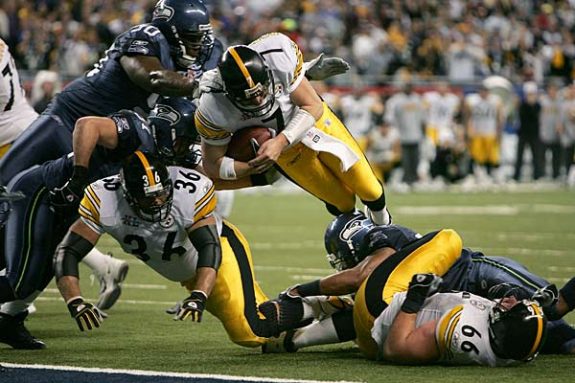 February 5th, 2006 the Steelers marched to Detroit on the heels of winning three straight road playoff games to take on the #1 seed in the NFC, the Seattle Seahawks.

The Steelers, who went 11-5 during the regular season but were a wild card in the AFC, went to Cincinnati, Indianapolis and Denver and won all three and were favored to beat Seattle in what turned out to be Jerome Bettis’ final game of his Hall of Fame career.

While it was a game that could be described as ‘sloppy’ at points, the Steelers trailed 3-0, but somehow found themselves up 7-3 at half, and early in the third quarter after a long TD run by Willie Parker went up 14-3.

They led 14-10 in the fourth quarter when they pulled off the play of the game, a TD pass from WR Antwaan Randle El to Hines Ward from 43 yards out that sealed the win.

Today we pay honor to that fifth Super Bowl, with a video as well as the submission from the game in my first book, “100 Things Every Steelers Fan Should Know and Do Before They Die,” which you can order still through Amazon and Borders.

February 5, 2006, in Detroit was a day of redemption for Bill Cowher and the Black and Gold, as they finally won their long-awaited fifth Super Bowl trophy. The Steelers had run through the AFC’s top three teams—the Bengals (No. 3), Colts (No. 1), and Broncos (No. 2)—and had earned the right to take on the NFC’s No. 1 Seattle Seahawks.

The focus of the game was on Steelers veteran running back Jerome Bettis—a local product of the Detroit area. He was given the key to the city during the two weeks of pregame hype, and much was made about Bettis playing what would be his final game of his Hall of Fame career.
Seattle ran a West Coast offense, and while the Steelers’ defense was expected to be able to shut them down, this was by no means a gimme. The Steelers entered the game as three-point favorites, and though the momentum and crowd seemed to be well on their side, the Seahawks had other ideas.

Seattle dominated the first quarter. They came out throwing, as quarterback Matt Hasselbeck picked his spots against the Steelers’ defense. And on the other side, the Steelers’ offense was in disarray. Ben Roethlisberger was a victim of an O-line that started the game with a couple penalties, and the team couldn’t do anything against Seattle—they didn’t even record a first down until the second quarter.
Seattle was able to convert on a drive, and kicker Josh Brown booted a 47-yard field goal, giving the Hawks a 3–0 lead with 22 seconds left in the first quarter. There was a sense of relief that the score wasn’t worse—it seemed the Steelers avoided what easily could have been a seven- or 10-point deficit based on how lackluster their first 15 minutes were.

They finally showed some signs of life in the second quarter, despite Roethlisberger’s first mistake of the game, a pick by Seattle’s Michael Boulware. The quarterback combined with Hines Ward to help the team with an 11-play drive that got them in position to score the game’s first touchdown. It looked like the drive was going to stall after Roethlisberger took a sack to set up a third-and-28 from the Seattle 32, but this time, the offense came through. Roethlisberger scrambled on the play to buy time, then just before getting hit, he fired a ball downfield that Ward came back for, making a great catch at the Seattle 3 and setting up first-and-goal.

Bettis gained two yards on the first two plays, then on third down Cowher called for Roethlisberger to take it on a sneak. In a controversial play that Seattle fans still say was a wrong call, Roethlisberger dove for the goal line, and official Bill Leavy hesitated but eventually ruled it a touchdown. A replay confirmed the call, and the Steelers led 7–3 at the half. Even Cowher admitted that, walking up the steps to the locker room, he wasn’t sure how they were ahead—but they were, and they were 30 minutes away from a title.

The big plays for the Steelers continued on the second play of the third quarter. A handoff was called to running back Willie Parker, and the back who wasn’t even drafted sprung loose. Thanks to a crushing block by All-Pro guard Alan Faneca, Parker was able to spring through a hole, and his burners did the rest. The back raced a Super Bowl record 75 yards into the end zone to give the Steelers a 14–3 advantage.
The Steelers continued to play tough on defense, and midway through the third quarter they had a chance to put the game away after a missed Seahawks field goal. Pittsburgh went on a drive led by two pass plays from Roethlisberger to Ward, and they found themselves with a first down at the Seattle 11. Two runs by Bettis put them in a third-and-6 from the Hawks’ 7.

After a timeout, Roethlisberger made a game-changing error when he tried to float a pass over the head of Kelly Herndon, but the ball floated right into his hands, and the Seattle defensive back returned the ball 76 yards to the Steelers’ 20. The celebration was going to have to wait, and fans and the team were going to have to sweat this thing out after all.

It took just three plays until Hasselbeck threw a 16-yard touchdown pass to tight end Jerramy Stevens to make it a 14–10 game. Game on, to say the least. Things got even more tense when the Hawks went on a drive that saw them get to the Steelers’ 19-yard line with a shot to take the lead. After a questionable holding call on a pass play that would have put the ball on the Steelers’ 1, Casey Hampton came up with a big sack to set up a second-and-25.

A pass play got the Hawks seven yards, Hasselbeck took a shot downfield, and Ike Taylor came up with a huge pick, taking the ball to the 29. Then the Steelers got another somewhat strange call when Hasselbeck got called for a low block, adding 15 yards to put the ball on the 44.

It was time not to play it safe, and offensive coordinator Ken Whisenhunt agreed. The Steelers got a first down after Roethlisberger went for five yards on a third-and-2 to the Hawks’ 43. Then came the play that became the staple of Super Bowl XL, and one that cemented the team’s fifth title.

The first-down play started with Roethlisberger handing off to Parker, who then gave it to wideout Antwaan Randle El on a wide receiver reverse. But, after a great block by Roethlisberger, Randle El, who was a quarterback in college, fired a perfect pass downfield to a wide-open Ward, who made the catch and leapt into the end zone with the final nail in the Seattle coffin to make it 21–10 with 9:04 to play.

The Steelers’ defense needed to make sure they didn’t give Seattle another chance. Seattle got to the Pittsburgh 47, but then a corner blitz by Deshea Townsend saved the day—he took down Hasselbeck with a five-yard sack, forcing a punt. The offense, led by Bettis on what proved to be the final carries of his career, chewed up 4:15 of the clock, and by the time the Steelers punted with two minutes left, the celebration in Steeler Nation had already started.

Seattle made one last gasp, and a final desperate drive fell short. The real celebration could start after Roethlisberger kneeled down to secure the team’s fifth title. Cowher’s postgame grin, hugging of his wife and daughters, and hoisting of the Lombardi Trophy told the real story. The coach, always known as one who couldn’t win the big game, had finally done it. Ward, who had five catches for 123 yards with a score, was the MVP, and Parker ended the day with 93 yards on 10 carries.

Twenty-six years after winning Super Bowl XIV, the Steelers finally had new hardware to display in their front office. At last.