Cover One: The Time To Replace Troy Polamalu Through The Draft Has Come 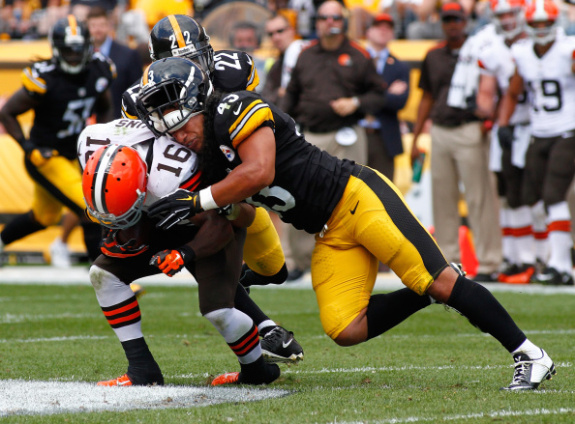 It’s unclear whether Troy Polamalu will return next season.  If Polamalu does return, it would be ludicrous to think he will start sixteen games. If there is one position that many feel the Pittsburgh Steelers will draft at, it is definitely safety.

It brings into question what type of safety the Steelers would draft. Would the Steelers prefer a safety who has excellent coverage and ball skills but is not a heavy hitter? Could they draft a player who is physically imposing and plays well in the box , but has limitations in coverage?

In a perfect world the Steelers would draft safety Landon Collins who can cover and be a big hitter.  If Collins is not available you have interception specialist Gerod Holliman who needs help with his tackling. You also have to take into consideration physical safeties such as Cody Prewitt and Jaquiski Tartt who can play well in the box and can lay heavy hits. Coverage-wise they have the athleticism to play tight on the deep pass plays but need coaching before being able to cover shorter routes.  Then there is Derron Smith who lacks size but is very instinctive and has leadership qualities.

Whoever is drafted may have to start early in the regular season. If Polamalu returns he will be a great mentor even if his playing time is reduced. The safety drafted by the Steelers must compete with third-year safety Shamarko Thomas who is a heavy hitter and good special teams player but lacks elite size.

It’s been said that the cornerback position is the most pressing need on the team, but in reality when trying to replace a future Hall of Famer in Polamalu, that is the most pressing need on the team in my opinion. If the correct safety is drafted it will allow corners such as Cortez Allen, William Gay and Antwon Blake to play more aggressively – which should lead to more turnovers. A secondary only works well when the safeties and cornerbacks can feed off of each other, not just cover corners alone.

Safety Eric Reid, who was drafted in the first round of the 2013 NFL Draft by the San Francisco 49ers, helped a secondary who already had corners who could cover. Hopefully the Steelers can find a safety in this year’s draft who can make that type of impact.