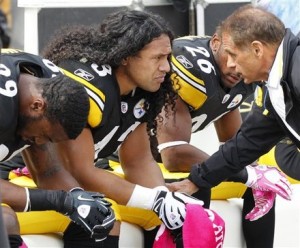 Troy Polamalu was this generation’s best safety to play the game. Depending on who you ask, the only person that may pale in comparison is Ed Reed. I have the utmost respect for Troy and his family, but the sad reality is football is a business and a young man’s game. The passion and heart that Troy displayed was a gift and a curse. Nobody could ever take the pounding that Troy put on his body and expect him to be the same player. It’s impossible, and whether he was forced out or if he retired on his own, we all have to move forward.

I have said countless times, if the Steelers had better execution in the red zone their good offense could enter the status of elite. Pittsburgh is a hard working pride-filled city. Their teams usually reflect the hard work character of the city. In the past, when you think of the Steelers you think of defense. The tide has now changed; the offense will have to carry this team. The turnover on defense will take time to gel.

In this upcoming draft, the Steelers have eight picks. I would estimate that at least six of these picks need to be on the defensive side of the ball. Up until the recent few drafts, Kevin Colbert has done a wonderful Job of drafting players. We can boast that under his regime Ben Roethlisberger, Polamalu, Antonio Brown, Lawrence Timmons, Maurkice Pouncey and Le’Veon Bell have been drafted. With Ben and Troy will certainly come first ballot Hall of Famers. It’s time restore the same drafting philosophies that made us great to begin with.

The draft is always a hit and miss proposition. It’s not a sure thing but the key is to draft more hits than misses. Steeler nation has been very critical and harsh on Tomlin and Colbert recently. Trust me, we can be worse – look at the Cleveland Browns’ draft picks during the same time. Cleveland has wasted four first round draft picks on quarterbacks since Roethlisberger’s tenure as a Steeler. (Tim Couch, Brady Quinn, Brandon Weeden and Johnny Manziel). What separates great teams from bad ones is the ability to overcome bad personnel moves. Moving forward it’s time for the Steelers to be great again with draft choices.