Cover One: ‘Debate Of The Greats’ at Quarterback for Steelers 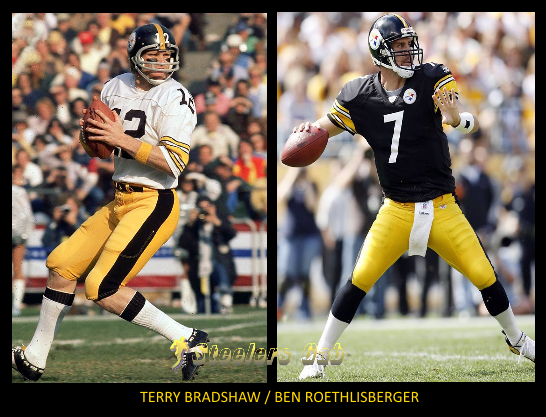 Some key things that Terry Bradshaw and Ben Roethlisberger have in common is that both have multiple super bowl rings, both have been hated by Pittsburgh Steelers fans at one point or another for what they have said, done, or been accused of and both have played well under pressure. Playing in different eras sometimes makes it hard to compare players, but it is always fun to do.  In this ‘Debate of the Greats’, I look at the two Steelers quarterbacks.

When it comes to Bradshaw, many will say he is the best because he had a career playoff record of 14-5 with 30 touchdowns and 26 interceptions. Bradshaw has been considered – according to many past great players and fans – one of the top ten greatest playoff quarterbacks of all time. Bradshaw was indeed blessed with great defenses year after year, not to mention playing with two Hall of Fame wide receivers in Lynn Swann and John Stallworth.  Add Hall of Fame running back/fullback Franco Harris to that mix as well.

Bradshaw also played in a era in which it was okay to be a game manger and not have to throw the football 25-40 times per game. Defensive backs were allowed to pull and tuck at receivers 25-30 yards down the field and defenses showed no mercy when it came to laying big hits on the quarterback. Bradshaw inherited a team that was not very good as they missed the playoffs in Bradshaw’s first two seasons. In clutch situations, Bradshaw was nothing short of excellent with 19 fourth quarter comebacks and 27 game winning drives.

Roethlisberger has shown a rare ability to play well through pain over and over again. Roethlisberger inherited a team that already had an elite defense, strong running game and good receivers in Hines Ward and Plaxico Burress. In a now quarterback-driven league in which everything a quarterback does is closely watched, Roethlisberger has excelled.

In Bradshaw’s day players played together much longer and coaches stayed with one team much longer. Roethlisberger has improved with many new players over the years. Last season Roethlisberger was tied for first in the league in passing yards while playing with unproven young receivers such as Martavis Bryant, Markus Wheaton and Justin Brown (six games). Many quarterbacks of yesteryear and today could not do that.

With an 11-5 playoff record to go along with 32 touchdowns and only nine interceptions, Roethlisberger needs three more wins to tie Bradshaw and gain even more credibility as the best Steelers quarterback of all time.  When it comes to performing well in “crunch time”, Roethlisberger has 25 fourth quarter comebacks and 35 game-winning drives.

As this debate continues, who do you think was the better quarterback?