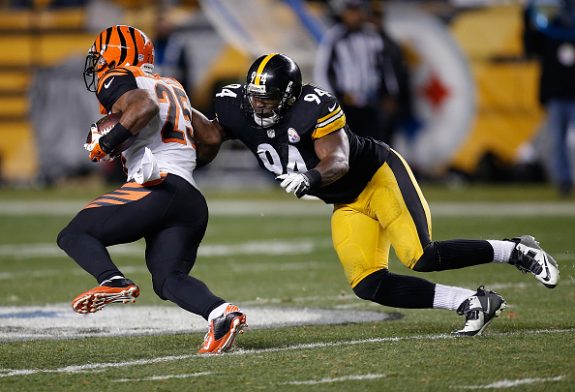 Steelers veteran inside linebacker Lawrence Timmons wants to retire a Steeler, and he’s willing to reopen his contract to make that happen, Jeremy Fowler of ESPN.com reports.

Timmons, 29, is still playing at a high level, recording 132 tackles and two sacks last season in the Steelers’ ‘Buck’ position, where he can rush the passer or play in a traditional linebacker space.

Timmons said “of course” when asked if he’d be willing to work with the Steelers contractually because he loves being in Pittsburgh. Theoretically, that would come in two forms: a restructure or an extension.

NFL.Com Ranks Steelers As Best The ‘Triplets’ for the 2015 Season
Steelers WR Martavis Bryant Adds 10 Pounds to Get Ready for 2015