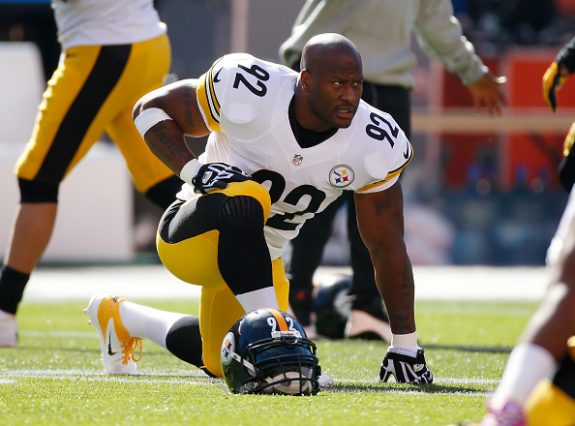 There’s been a lot of chatter about the return of LB James Harrison in 2015 – and today the vet finally spoke out about it.

After Tuesday’s OTA’s, the 37-year-old former NFL Defensive Player of the Year talked about this role on the team as far as being a mentor to the team’s younger linebackers and his place in the team overall.

He stated that he will show what to do with his actions, and not so much with his mouth.

“I show what I do by going out there and actually doing it,” Harrison said. “I don’t talk to you about it, I do it. So if you just watch what I do, it really shouldn’t be that hard to do the things that’s necessary.”

He also had something to say about the amount of snaps that he will play in 2015 – and let’s just say he’s not very happy being told he’ll only play 25 snaps per game.

The Steelers plan to limit James Harrison's snap count to 25 a game, His reaction… pic.twitter.com/Y3Jb5yz3iG