Jesse James: Why the Big guy could make difference quickly 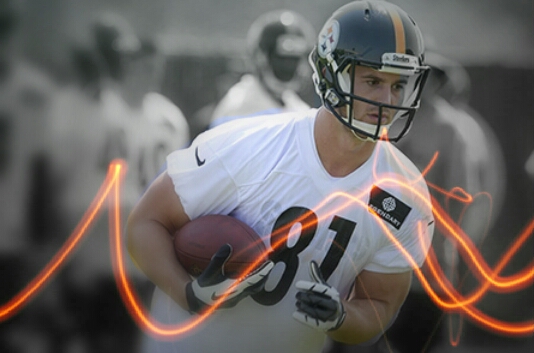 Every year heading into training camp there are certain players that fans keep an eye on hoping that they develop quickly.  This season one of those players is Jesse James. The 6’7″, 260 pound tight end has a lot going for him.  With other tight ends to compete with, the fans will be rooting for James for several reasons; whether it be his athleticism or college pedigree – James has some good things going for him.

James’ receiving skills are above average coming out of college.  Over the past ten seasons only one tight end selected by the Pittsburgh Steelers came out of college with advanced recieving skills and that was Health Miller.   The problem is Miller is no longer a spring chicken as he will turn 33 this season.

James ran an impressive 4.66 in the 40 yard dash. James is not a burner but he can work the seams very well and outrun some linebackers and out muscle corners and safeties. His size instantly makes him a threat in short yardage situations and goal situations as a reciever or blocker. Also, the potential is there to be a solid H-back.
James was not great in rookie minicamp but he was not terrible either.  If James is to move into the number two tight position he must prove is a good, not average, blocker.  Backup tight end Matt Spaeth has made a living as a blocker and catching short passes but never blocks out of the backfield.

If James can prove to be a a viable option, it gives the Steelers at least six consistent receiving options in Antonio Brown, Martavis Bryant, Markus Wheaton, Health Miller, Le’Veon Bell, and potentially Jesse James.

When you have an offense in which both starting wide receivers and tight ends can consistently beat single coverage, as well as the starting running back, very few defenses can stop that type of offense.

Miller probably doesn’t have 3-5 years left in him to play at a high level, so James will be praised everytime he shows improvement. James may not develop into a Jimmy Graham type of tight end who can be split out wide, but he could be another Miller which will make him an above average tight end.

The Steelers have a great tradition of producing head coaches, running backs, and centers. The potential is there for James to continue what Miller has started and add another great position tradition for Pittsburgh.