Steelers Bounce Back Big Behind Ben, Brown and Williams in 43-18 Win Over 49ers 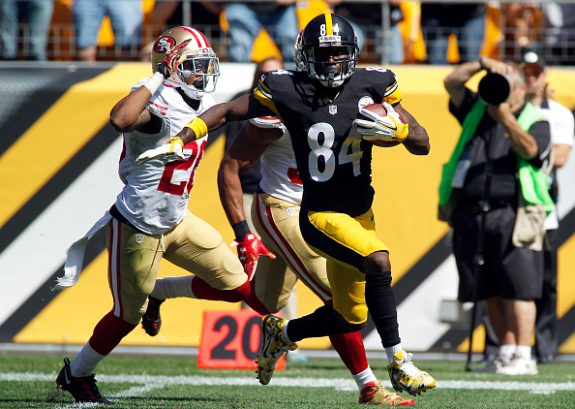 The Steelers were chomping at the bit to get back on the field after their rather lackluster outing 10 days ago in their season opener against the New England Patriots.

In their home opener Sunday against the San Francisco 49’ers, they did disappoint the home fans at Heinz Field.

Picking up pretty much where they left off last season when their offense was one of the most explosive in the NFL, the Steelers dominated the Niners building a 29-3 halftime lead and cruising the rest of the way in a 43-18 win.

Ben Roethlisberger dominated the Niners D, missing on just six passes all day, going 21-for-27 for 369 yards and three touchdowns. He ended the day with a passer rating of 155.8

His favorite target, as usual, was Antonio Brown, who torched the Niners defensive backfield for 9 grabs for 195 yards and a late touchdown.

He twisted and turned all day on the Niners, and averaged 18.9 yards per catch. It seemed no matter what coverage the Niners shifted to him, he was able to get open and make plays.

The run game was good again with backup DeAngelo Williams, who scored three touchdowns on the day and ran for 67 yards on 19 carries. He wasn’t as dominant as in the opener vs the Pats, but didn’t need to be with Ben on fire most of the day.

The Steelers scored first at the 4:20 mark of the first quarter when Roethlisberger hit TE Heath Miller with a short two-yard score to make it 6-0.

The team went for two and got it when Ben hit Brown to make it 8-0.

After a Phil Dawson field goal made it 7-3, the Steelers struck you again, as Williams went over from two yards out to make it 14-3. The team again went for two after a penalty, and Ben found Miller to make it 16-3.

Less than 3 minutes later the Steelers put the game away, as Roethlisberger hit Darrius Heyward-Bey with a deep 35-yard TD to put the score at 22-3 after Josh Scobee missed the PAT.

The Steelers made it 29-3 at the half when Williams went over from two yards out with 1:58 to play in the first half.

After a scoreless third quarter, the Niners got their first TD when Colin Kaepernick hit Anquan Boldin from 14 yards out for their first touchdown to close it to 29-10.

Ben and Brown hooked up on a shot score from 7 yards out to give the Steelers a 43-18 lead with 7:43 to play. The Niners attempted toscored again, but the ball was loose and Dupree was credited with the stop.

The win evens the Steelers at 1-1 on the year, dropping San Francisco to 1-1.

Next Sunday the black and gold travel to play the St.Louis Rams.