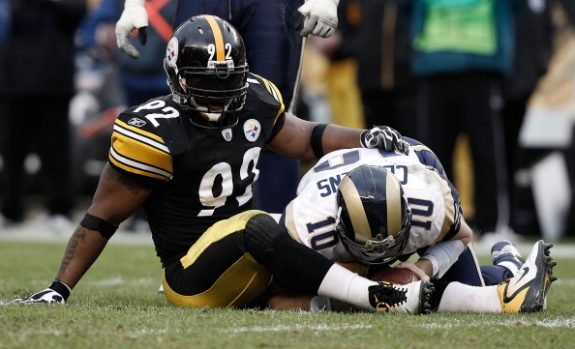 The high-powered Steelers offense rolls into St.Louis Sunday to take on the 1-1 Rams, who last week themselves were shocked on the
road by the Washington Redskins.

Washington ran all over the Rams, which could be a tactic that the Steelers will employ on Sunday with the return of star running back Le’Veon Bell to the offense.

Last week the Steelers scored 43, which shows just how good their offense can be when clicking. Now with a couple defensive injuries, they may need every point they can get against a Rams team that beat the World Champion Seahawks in week one at home.

Here’s our keys as well as prediction for Sunday’s matchup at the Edward Jones Dome.

1. Ring the Bell, But Don’t Forget About DeAngelo– Mike Tomlin made his intentions clear when it came to the returning Le’Veon Bell earlier in the week. ”I’m going to play Le’Veon Bell,” Tomlin said. ”We’ll figure that out (the workload) as we go. If 26 (Bell) is available to us, we’re going to use him.” As well the Steelers should use Bell, both running the ball and in the passing game. At the same time, make sure that DeAngelo Williams still sees action, as his 204 yards on the ground over the last two weeks deserves carries against the Rams. The St. Louis run defense is ranked third-worst, allowing an average of 153.0 yards per game over the first two weeks.

2. Keep Up the Good Work on 3rd Downs – The Steelers comes into Sunday second in third-down percentage at 52.0 over the first two games. That’s a good thing, and that needs to continue. One way this offense can handicap itself is by not being sloppy and making plays on third down. In the Rams opener at home vs Seattle, the Hawks were 8-for-19 on third downs, and last week vs Washington the Skins went 50 percent, hitting 8-for-16 on third down. Washington held the ball for 37 plus minutes vs the Rams, another key stat that the Steelers should try and duplicate Sunday in the Dome.

3. Keep the Pressure on Foles – Last week against the Niners the Steelers D seemed to be all over the place, a lot of it from second-year LB Ryan Shazier, who unfortunately won’t be in uniform Sunday due to injury. Nevertheless, against Nick Foles, who isn’t as crafty getting away from pressure like Colin Kaepernick was, the black and gold need to keep him under control and bury the pocket as much as possible. Last week Foles, who was acquired in a deal with the Eagles this offseason, was just 17 of 32 for 150 yards and one TD. In the first two games the Rams offense ranks last in the NFL in percentage of pass attempts to receivers (40.7) and percentage of completions to them (34.3). It’s up to the Steelers D to make sure to keep it that way Sunday.

Prediction – This matchup reminds me a lot of last seasons road game vs the Falcons, a day when Ben Roethlisberger threw for 360 yards and the D came up with a pick 6 in a 27-20 win. The Rams are a team that still doesn’t have a true identity yet, and with Jeff Fisher they will try to score the upset over a Steelers team that should win this game. Leave it to the run game to control the pace and tempo, and the defense can’t afford to give up big plays. Also look for the special teams, which the Rams have a good one with kick returner Tavon Austin, who took back a kick 75 yards for a score in week one. I like the feel of this Steelers squad and what they did a week ago, so go with the Steelers in a close one, as they will score their first road win of 2015. Steelers 35 Rams 20

Blast Furnace: RB depth the best thing to come out of Steelers 1-1 start
The Question Every Steelers Fan Wants to Know: Can This Team Win if Roethlisberger Misses Extended Time?