Steelers Pull Out Miracle Win at the Buzzer; Top Chargers 24-20 in San Diego 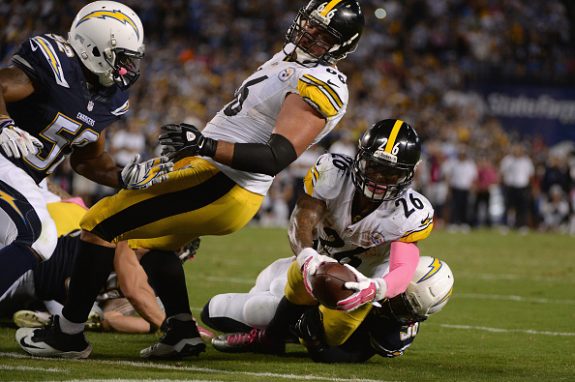 Call it risky. Call it guts. Whatever you call it – Mike Tomlin’s decision to go for it from the one-foot line with :05 seconds left down three worked Monday night, and because of it the Steelers are 3-2 instead of 2-3.

Le’Veon Bell went over from a half yard out with the game-winning touchdown and the Steelers pulled out an Improbable 24-20 win in a game it appeared they had no business winning.

The Steelers trailed it 20-17 after Josh Lambo kicked a 54-yard field goal with 2:59 left, but Michael Vick, who was rather awful most of the night, led the team downfield to set up Bell’s chance to win the game.

It looked like Bell was stopped out of the wildcat, but he fought his way to the end zone and reached the ball over the goal line for the winning score as time expired.

The replay was ruled correctly, that the call stood, and the Steelers escaped with a hard fought win.

“I was confident I got it in,” Bell said.

Bell ended with 111 yards on 21 carries with the game winning score.

Vick finished the night going 13-for-26 for 203 yards with a touchdown, and his 24-yard run set the Steelers up inside the Chargers 20 in the final seconds.

The QB then hit Heath Miller to the one-yard line, and a personal foul was called on San Diego for hitting Miller high, which put the ball at the half yard line with five seconds left.

Tomlin said he felt that he would be able to run a play and call a timeout, he was wrong, but luckly he didn’t need it.

“We have to run the football, we have Le’Veon Bell, we had a chance to win the game, we’re in a hostile environment, we had to go for the win,” Tomlin said.

The Steelers defense played a great game considering they gave up a touchdown on the Chargers opening drive, and held them in check till a wild fourth quarter in which 27 total points were scored, 14 for the Steelers and 13 for San Diego.

San Diego held the ball for 33 plus minutes, and at one point in the second half they ran 44 offensive plays, and at that point the Steelers had run 44 plays total.

In the end, it was a gutsy effort from all sides.

The Steelers defense came up with a huge play on third down on San Diego’s final drive, as Lawrence Timmons knocked a Philip Rivers pass down to force a field goal.

From there Vick, who the drive before hit Markus Wheaton with a 72-yard score to tie the game up at 17, went to work, and after two handoffs to Bell to get a first down was able to drive the team downfield for the wild finish.

Rookie kicker Chris Boswell also gets a game ball, as he hit three extra points, and a 47-yard field goal, all while Steelers fans everywhere were holding their breath.

Speaking of which, Steeler Nation took over Qualcomm Stadium, and throughout the night they dominated the crowd, outcheering Chargers fans most of the game.

“I would like to thank Steeler Nation, we get that type of support about every time we go on the road, but it never gets old,” Tomlin said.

The Steelers have another short week, as they will come home Sunday for the