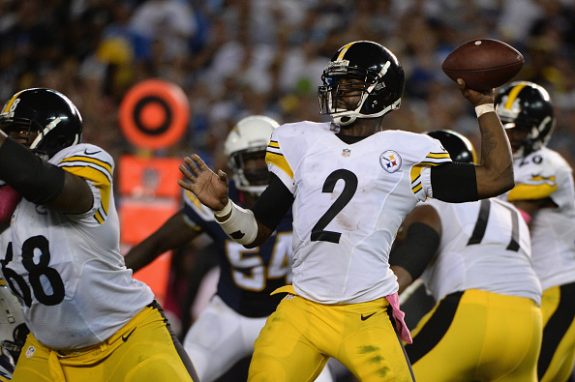 After Monday’s miracle win for the Steelers over the Chargers, they come home on a short week to take on the Arizona Cardinals, a team that looks a lot like them in terms of personality with former OC Bruce Arians.

Michael Vick will be back under center, as Ben Roethlisberger is still at least a week away from playing again after his leg injury a few weeks back.

The Cardinals are flying high (no pun intended) as they are 4-1 and playing well, looking like a serious contender in the NFC this season.

Today we take a look at the game, and give our prediction as to how this thing will play out in front of the Heinz Field faithful Sunday.

1. Be Careful with the Ball – The Cardinals are a +6 in the turnover department, and that means the Steelers have to be careful with the ball Sunday. Michael Vick has done a nice job, but also he’s been very lucky, as San Diego easily dropped 3-4 picks on Monday night, something the Cardinals won’t do. The Cards have 11 picks in five games, that’s two plus picks a game. Vick can’t play with fire, or he and the offense is gonna get burned, something they were lucky not to do on Monday night.

2. Win the Special Teams Battle – Arizona always seems to have a good special teams, and this year overall they are ranked second in the NFL in return yards, putting up 39 yards per kick return, and 12.2 yards on punt returns. David Johnson already has a 108-yard kickoff return for a score this season, and he’s putting up 51 yards per return to this point. The Steelers special teams needs to have a strong day, and they need to make sure they don’t allow the Cardinals to run the field position battle and put the Steelers in a hole.

3. Pressure Carson – Over the years with Cincinnati, the Steelers seemed to have success against Carson Palmer, and that trend needs to continue on Sunday. The Cardinals are having a great season on offense with Palmer leading the charge and a rebirth by wide out Larry Fitzgerald. The run game is putting up good numbers with former Titans workhorse Chris Johnson averaging 5 yards per carry. The key though is to make Palmer uncomfortable, making him rush throws, and for the LB’s and secondary to have good games. If Arizona keeps playing as well as they have been on offense, they will be tough to handle.

Prediction – Arizona is playing great right now, and the Steelers are going to have to play a A+ plus game to get it done on Sunday, and that’s asking a lot. After Monday’s huge win it’s normal to have a letdown, and for the team to have issues after such an emotional win. Vick needs to play better than he did on Monday, because if he struggles for a period of the game like he did Monday, the team doesn’t stand a shot. The Cards are just a well rounded team, and unless the Steelers are +2 or more in the turnover battle, I see them falling short. Arizona 27 Pittsburgh 17