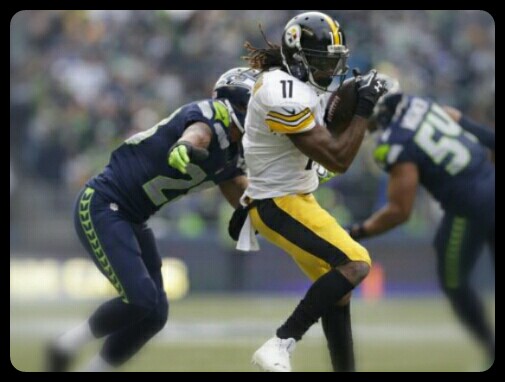 Pittsburgh Steelers receiver Markus Wheaton hadn’t been on the radar much in the last couple of weeks. On Sunday, against the Seahawks, it was Wheaton’s chance in the spotlight.

Wheaton had spoken about his drop in production, explaining to ESPN.com, “The middle of the field is a chemistry thing. When Ben came back, he and Heath [Miller] had been doing it for years so their chemistry hadn’t gone anywhere. It’s just about building it back … I was getting three, four, five catches a game [last year] and the chemistry was there. It’s easier when Ben’s there all 16 games and I’m there all 16 games.”

Wheaton capitalized on a Seattle defensive backfield that focused on Antonio Brown and the confidence of Roethlisberger in his ability to secure the catch. Wheaton had a career day by surpassing 100 receiving yards in a game for the first time; ending the day with nine catches for 201 yards. His longest was a 69-yard touchdown.

Per CBS Sports, Wheaton’s total yards receiving was the most for any receiver inside CenturyLink Field since its opening in 2002.

DeAngelo Williams – RB,rushed eight times for 29 yards and caught seven passes for 88 more to finish with 117 yards from scrimmage.