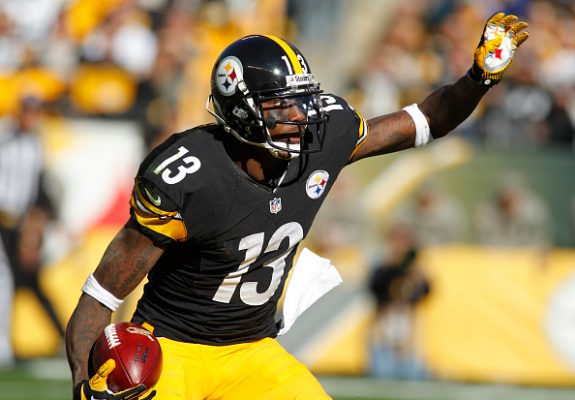 After a pair of fumbles and just overall lack of production, the Jacoby Jones era as punt and kick returner for the Steelers is over.

Mark Kabloy of the Tribune Review reports that the Steelers depth chart for the Bengals game is out and Antonio Brown is listed as the top punt returner and Markus Wheaton as the kick returner.

While an official move with Jones hasn’t taken place, it’s rather obvious that the team is going to pull the plug on him today and give him his release from all indications.

Jones botched the opening kickoff which the Colts recovered, and the Steelers avoided points on the Indy drive when Jarvis Jones picked off a pass on third down.

Later on he fumbled a punt, but the Steelers recovered it.

The Steelers claimed Jones off of waivers a month ago from the Chargers, but he’s been awful as the teams returner in his time at the position, averaging 3.2 yards per punt and 24.4 per kick return.

For now he’s listed as the backup kick returner and third-string punt returner, but here’s a prediction that he won’t be on the roster by the time the Steelers take the field Sunday.