Between the Hashmarks: Steelers Self-Destruct Against Ravens

The Pittsburgh Steelers fall to the Baltimore Ravens for the second time in 2015, making the playoffs look out of reach in 2015. 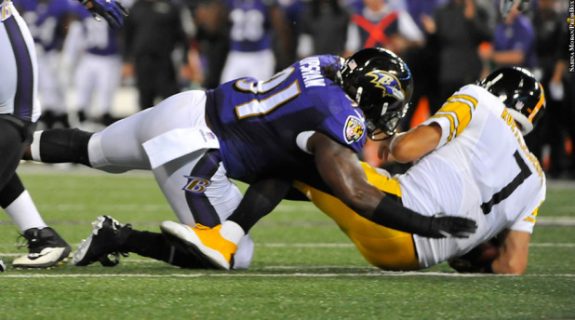 What happened to the hot Pittsburgh offense?  Where was the Steelers defense that shutout the Denver Broncos in Week 15?  Against Baltimore, in a game that had zero implications for the Ravens, the Steelers were looking to clinch a playoff spot for 2015.  Instead, they were flatter than a DeflateGate ball and handed Baltimore a gimme.  It was ugly.  Steelers running back DeAngelo Williams was easily the Steelers’ best weapon on both sides of the ball – even if he saw zero defensive snaps.  It begs the question:  What is going on in Pittsburgh?

Mentally, the Steelers did not even seem to be in the game.  Ben Roethlisberger was not at the top of his game.  Antonio Brown, Markus Wheaton and Martavis Bryant were severely limited by a Ravens defensive backfield that was riddled with injuries.  The offensive line couldn’t keep Roethlisberger from getting sacked – but give credit to Big Ben for holding onto the ball for an eternity adding to the reason for those results.  On defense, they gave up big plays in the run and pass game.

This game resembled an episode of the Walking Dead.  Zombie-like play from Pittsburgh was so far from the type of performance needed to be considered a legitimate team heading into a possible playoff berth.  After they self-destructed, the Steelers must win against the Browns to have a shot at all.  Steelers fans, after viewing a horrifying performance, have to be wondering if they’ll be taking down their decor and putting the jerseys on mothballs until 2016.

The Kansas City Chiefs and New York Jets both won their games this week, taking control of their destiny in the wild-card race.  Pittsburgh just handed Baltimore two easy wins this season – games that Baltimore only deserved because the Steelers had zero adjustments, zero pep and an energy level that was better suited for nap time that game time.

Steelers Playoff Hopes on Life Support; Lay Egg in Baltimore Losing 20-17
The Steelers Road to the Playoffs: They Have Made it Before in Tougher Circumstances