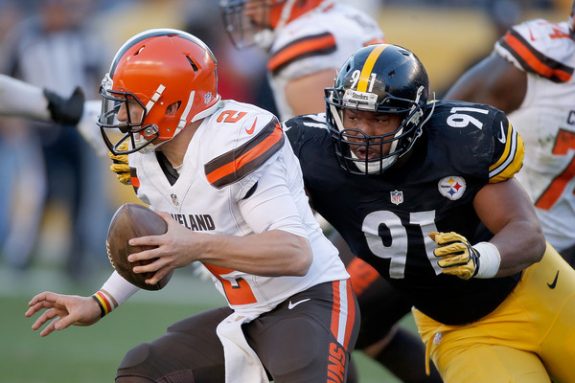 This time of year, with the final regular season game about to be played, I get a little emotional.  I know I am about to see some familiar faces pull of their black and gold jerseys for the final time in their career, players retire or head to other cities.  I root for “one last game” with every other Steelers fan who hopes to see their Pittsburgh Steelers enter another playoff round and challenge for a Super Bow.  It’s an emotional time.  The fans feel it.  The players feel it.

2015 has been one of the strangest seasons I have witnessed from the Steelers in a long time.  After a long list of injuries, this team looked to be a bust from early on.  Then miracles started happening.  Ben Roethlisberger came into a game for an injured Landry Jones as basically the one-footed backup for a Steelers win.  Antonio Brown was getting consoled by Heath Miller to be patient with Mike Vick and Jones, and then Brown went on a game-to-game record-breaking tear.  Le’Veon Bell didn’t get his big redemption; instead it was an aged DeAngelo Williams that looked almost as fresh as his second season in the league.  I could give examples like this about nearly every player that has been in the Steelers’ wild roster rotation this year.

With the Cleveland Browns looming as the last opponent of the 2015 regular season, it seems normal.  The Steelers have seen the Browns a lot to wrap up a season.  This year feels a bit more…frightening.  It might not have if Pittsburgh hadn’t gone yinzer-bonkers and handed a befuddled Ravens team a win last weekend.  Without ‘elite’ Joe Flacco (my favorite AFC North joke), the Ravens managed to pull a nice trick on Pittsburgh.  Grab a guy no one even thought was still in the league or capable, dress him and then have him tap dance over a team that was super hot and throw a big bucket of water on those flames.  It happened.  We all saw it.  The Steelers walked off the field looking dazed and confused.  And now, the Browns with their problem child (Johnny) Manziel, their ugly new uniforms that look like college leftovers from a Syracuse experiment and roller-coaster mentality may just ruin my last Steelers game of the year.

I want my Primanti Brothers sandwich and a Big Gulp of celebration.  I don’t want to sit around and wonder if the Rex Ryan-cursed Buffalo Bills live up to these half-cocked quotes:

“I think (the Jets) are sixth and eighth, one is defense is sixth, offense is eighth in the league, or whatever…”

“The spoiler I think it probably you know maybe, who knows…”

Is that the guy you want to put your playoff hopes in?  If so, are you enjoying the same frothy beverage he is in the back of a trailer somewhere?

Off to Cleveland the Steelers go…and my gut already hurts.  No more breaking down what has to go right and can’t go wrong.  There’s no time to find a golden nugget buried in the depth chart or scout team to bring onto the field for last-minute heroics.  Sunday’s game will just be a win or go home and wait for next season situation, and that makes me want to buy stock in an antacid company immediately.

I raise my Heinz Field replica stein to one last hurrah, hoping with every ounce of black and gold charm, to the Steelers of 2015 that they will get a victory, see the Bills lay a big “L” on the Jets and give our Iron City boys a shot at redemption in the post-season.  Here’s to you getting to see just one more game as well Steelers Nation.

And if not…here’s to a 2015 season we all hoped would have wrapped up a lot differently.

The Steelers Road to the Playoffs: They Have Made it Before in Tougher Circumstances
What Makes Steelers Fans So Loyal