In the End, Joey Porter Once Again Beats the Bengals 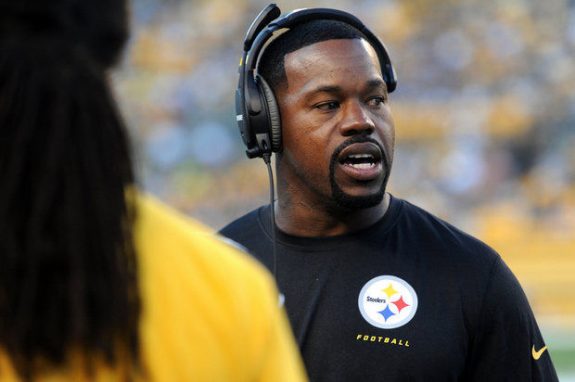 He was the voice of the Steelers when he lined up at outside linebacker, and now as a coach, it appears that very little has changed.

Joey Porter’s actions Saturday night in Cincinnati led the Steelers to a win over the Bengals, an improbable win based on the circumstances that gave the Steelers the chance to kick a game-winning field goal in the final seconds to move onto Denver to play the Broncos next Sunday.

In case you live under a rock and don’t know what Porter did, the coach came onto the field after Antonio Brown was knocked silly by a dumb hit by Bengals LB Vontaze Burfict, and proceeded to get into it (like he always did), chirping with Bengals players.

The result, Adam ‘Pacman’ Jones bumped an official, causing another 15 yards to be added on, allowing Chris Boswell to attempt a much more easier 35-yard field goal for the win.

Bengals fans are irate that Porter was even allowed onto the field, and are calling for the officials and wondering why the former linebacker wasn’t flagged for getting into what became a wild war of words and hits between the two rivals.

Porter is going to pay for coming onto the field, according to Adam Schefter who says a fine is coming his way

Steelers assistant coach Joey Porter will be fined for coming on to field Saturday night and engaging Bengals players, per a source.

Some are already saying that Mike Tomlin had Porter go on to the field specifically to try and engage with Bengals players, with the hopes of them doing something dumb (to which they delivered).

In the end, it was the Bengals who clearly lost their cool, and because of it, lost the game.

For Porter? He got a game ball for his troubles according to a couple of reports, and the Steelers live to fight another day in the NFL Playoffs.