Flashback: The Wild Card Steelers Once Met a #1 Seeded Manning Team in the Playoffs 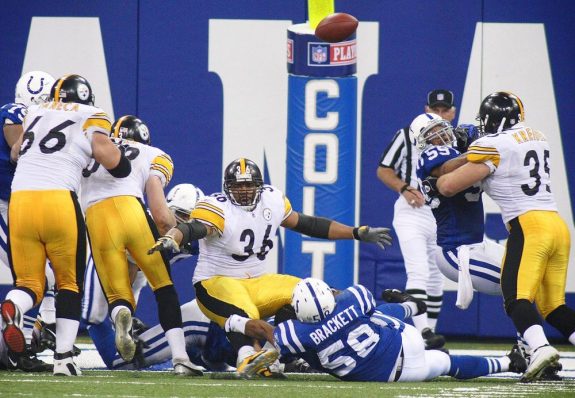 The 6th seeded Steelers will have their backs against the walls Sunday when they go to Denver to take on the #1 Broncos and Peyton Manning, in what could be the last hurrah for Manning if the Steelers can best the Broncos.

This isn’t the first time a wild card Steelers team has met a first-seeded Manning led team in the postseason, it happened before, and was one of the most memorable games in Steelers history.

The date was January 15th, 2005 in Indianapolis, when Manning was at the peak of his career and the Colts were a first seed after going 14-2 in the regular season including a win over the Steelers on a Monday night.

The outcome was one of the biggest upsets in NFL playoff history, as the Steelers built a 21-3 lead enroute to a 21-18 win.

Trust me, if you didn’t see the game live, it wasn’t as easy as it sounded. The Steelers nearly lost the game when leading by three in the last minutes, after Hall of Famer Jerome Bettis fumbled and Colts defensive back Nick Harper picked up the ball and raced the other way for what could have been a touchdown.

Instead, Ben Roethlisberger made one of the greatest tackles in history, a play that is known today as ‘The Tackle.’

“It was a unique game. It ranks up there. It was crazy,” Bettis said that day.

Indy still had a chance to tie the game and send it into overtime, but loud mouth kicker Mike Vanderjagt pushed the kick about as wide as any kick one could ever see.

It was a day that Steeler fans won’t soon forget. One fan even had a heart attack after the Bettis fumble (he was okay). Here’s to hoping that the Steelers can repeat the performance and send Manning off into the sunset and advance to the AFC Title Game.