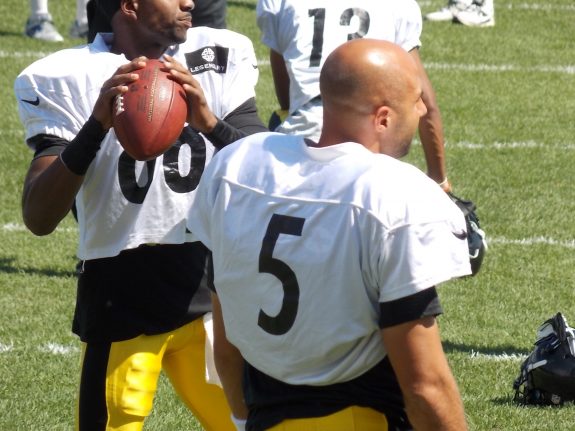 It’s been a tough year plus for Steelers backup QB Bruce Gradkowski, as he missed all of last season which is why the black and gold inked Michael Vick.

Gradkowski it appears has another major setback he will have to overcome to play again, as reports say he has a sizable hamstring tear, and could miss time putting more of the Steelers backup QB situation in doubt.

ESPN says the injury was suffered during the teams’ preseason loss at Heinz Field to the Lions.

Landry Jones looks like he’s set as Ben Roethlisberger’s backup at QB, but as you know in the NFL, you better have more than two QB’s, as the Steelers found that out last season.

The team could put Gradkowski on injured reserve and go out and find another QB (Vick is available again if they want to go that route) or they could wait and see how bad the injury is and if can bounce back from it.

Dustin Vaughan is another QB that is in camp, but he’s never taken an NFL snap and the team can’t be excited about the prospect of having him have to take the field at anytime with his little track record.

New Episodes of NFL Films’ ‘A Football Life’ and ‘The Timeline’ to Highlight the Steelers
NFL Wants to Still Speak with Harrison; He Wants Advice Before a Talk Happens