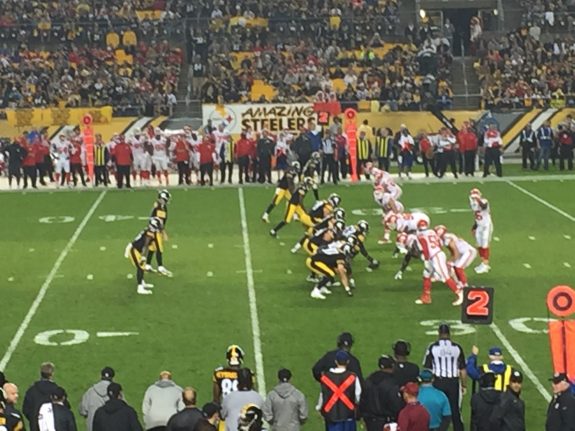 The Steelers are in the process of a dominating home win on prime time over the Chiefs – leading it 29-0 at the half.

Here’s some thoughts on what we’ve seen thus far.

* Pressure on the QB seems to work. 5)3 Steelers have put solid pressure on Chiefs QB Alex Smith, making sure he doesn’t have a whole lot of time to throw. This is vastly different from the last few weeks when they couldn’t get to the QB and were picked apart at times. The Chiefs playing from behind in a rain storm is always a good thing.

* We’ve not seen much from the Steelers run game, but that’s okay as Big Ben and the passing game have more than made up for it. Up by nearly 30 look for more of a dose of DA and Le’Veon Bell in the second half.

* There’s not much you can say bad about how the Steelers responded after a 31-point loss last week – but kudos to the coaches and players for obviously being focused and coming out with a killer instinct at home.

* Will we have a home game at Heinz Field in the 2016 season that’s not affected by bad weather?