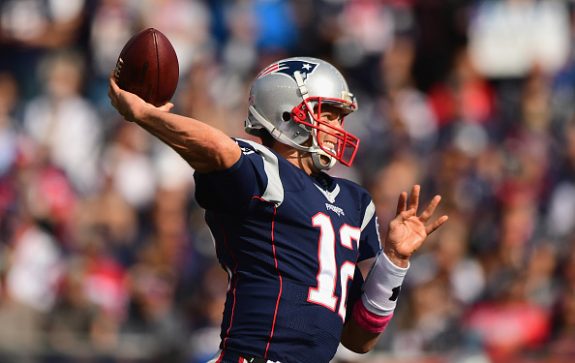 Sunday’s battle between the Steelers and Patriots at Heinz Field was supposed to be a preview of the AFC Title game in January hopefully to be played right back in Pittsburgh.

Instead, with Ben Roethlisberger going under the knife Monday morning, today’s game between the Steelers and Patriots simply doesn’t have the same feel, and for good reason.

No one thinks the Steelers, with Landry Jones at quarterback, can win. Jones started two games last season for the injured Roethlisberger, and while he barley played the second one (the famous Cleveland game in which Ben came in and buried the Browns), he had some good moments, and some bad.

He’s going to need a ton more good today, as the Steelers look to find a way, any way, to slow down a ticked off Tom Brady and a New England team that look sadly like the team to beat in the AFC.

With that, today we break down what the Steelers have to try to do – and if there’s any shot they can do it.

1. Success in the Run to Set Up the Pass – Early

If the Steelers offense is going to have success, they have to be able to use BOTH Le’Veon Bell and DeAngelo Williams, and be able for those two to find a way to get chunks of yards early in the game. The Pats are 12th in the NFL, allowing 92 yards per game on the ground, and the Steelers easily have to go over that mark if they want a chance to win. Look for Todd Haley to try to use his two backs, and then go to some safe play-action for Jones to try and build his confidence, which could also go a long way in getting the crowd in the game for the Steelers.

2. Safeties Have to Play Well

Martellus Bennett and Rob Gronkowski are both players that can pick apart a defense, and if the Steelers don’t play close attention to the both of them, it’s going to be a long day. Gronk and Brady and just getting to know each other again, and it appears Bennett is the one who is reaping the rewards of Gronk’s injury with a big early part of 2016. Mike Mitchell and Robert Golden will both need to have big games against these two horses, and also make sure when they do make catches to bring them down and not let them run free. Let’s not forget what happened in the opener last season when Gronk went off for a huge night against the Steelers.

3. Find Anyway You Can to Disrupt Brady

Last season in their game Brady was just on target, hitting for 288 yards and four TD’s, and while the Steelers did get to him a little, this season the pass rush has been one word – awful. 8 sacks in 6 games isn’t going to get it done, and while this team lingers to get to the QB, it’s a big reason even last week an average QB like Ryan Tannehill was able to sit back and pick them apart with some big plays downfield. Keith Butler needs to get more sacks from this group, either by rotating pass rushers, or by scheme, and as if today didn’t look bad enough, give Brady time and this could get ugly early.

Prediction – The Steelers without Ben just don’t have the horses to compete with the Pats. It will be one of those days you hope the team can simply hang in, and if they are in the game in the fourth quarter maybe they can make a play or two to pull off the upset. With Ben this would have been a lot of fun, without him, it looks like just another day where Brady and his mates march into Pittsburgh and beat up the Steelers, as Brady will walk away today with an all-time mark of 7-2 against the Steelers. New England 34 Pittsburgh 14