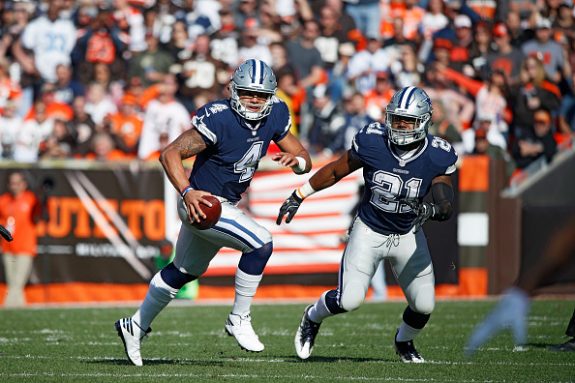 The Steelers 2016 season is on the edge after three straight losses, and with eight games left in the season they currently are on the outside looking in at the postseason, as they trail the Ravens by 1/2 a game in the AFC North after the Ravens win over the Browns on Thursday night.

The Dallas Cowboys invade Heinz Field for a huge matchup that will be the national game of the week on Fox, and while the Cowboys are the talk of the NFL, the Steelers have a shot to quiet those that think the season is already over.rn

Here’s our quick look at the game, and if we think the Steelers will be able to get back on track and avoid being under .500 which is pretty crazy as this team was 4-1 just four weeks ago.

Last weeks’ loss to the Ravens could be defined in two plays, the 95-yard TD pass to Mike Wallace and the blocked punt. Take away those 14 points, and even as bad as the offense played the Steelers could have escaped Baltimore with a win. Dak Prescott and the Cowboys have been able to put together a huge season not only with their top ranked run game but also by being careful with the ball, and they can go downfield with guys like Dez Bryant and Cole Beasley, and the Steelers have to be better at keeping things in front of them Sunday.

Ezekiel Elliott leads the NFL with 891 yards rushing for the Cowboys’ top-ranked rushing attack, putting up 165 yards per game. The Steelers run D did a good job against the Ravens, holding them to 50 yards, but the Cowboys won’t give up on the run so easy, so look for them to keep trying to pound away at the Steelers. The Dolphins and Patriots in the Steelers first two losses of this three-game streak ran the ball well, and if the Cowboys want to win they will try to get Elliott off early. The Steelers have to have a big game from Ryan Shazier and the linebackers to make sure Elliott doesn’t have the same success he’s had against other teams.

The Steelers just haven’t looked right in the last three games, of course all losses, and a lot of it seems like they just aren’t being as aggressive in their game plan. Last week’s offensive game plan was terrible, as they never got anything going, and the game before against the Pats they did get things moving early, but mistakes and turnovers did them in. If they are going to hand the Cowboys their second loss, it would help a ton to get an early lead, and be able to focus on stopping the Cowboys three-headed offensive monster of Prescott, Elliott and Bryant. This team can’t come out and played scared or wait to for something to happen – they have to make it happen.

Prediction: A win and the season can get back on track, even more so with two games coming up in the final seven against the winless Browns, but a loss and the teams woes could snowball, to the point of no return. I think unlike the last week where they were passive and couldn’t get Ben Roethlisberger they will finally get this offense moving again, and also use Le’Veon Bell and make him effective again as well. Look for Elliott to have his issues, and for home field to pay off for the black and gold as they get a statement win over a very good NFC foe. Pittsburgh 27 Dallas 21