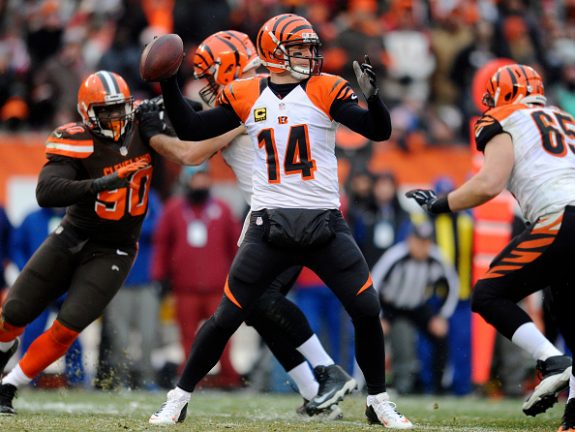 Sunday the Steelers look for their fifth and final regular season win of the season as they take on one of their biggest rivals, the Cincinnati Bengals at Paul Brown Stadium.

The Steelers beat the Bengals in what seems like forever ago back in week two at Heinz Field, and so much has happened since then, but no matter it’s always a fight when these two AFC North teams take the field.

If the Steelers can escape Cincy with a win, they will knock the Bengals out of the postseason, and also give themselves even a further chance to clinch the AFC North as they will be sitting at 9-5 with two more games left, both at home.

Here’s our three keys for the black and gold, as well as our prediction for Sunday’s showdown with Andy Dalton and company.

1. Get Bell The Ball All Day

Le’Veon Bell hasn’t done much against the Bengals as of late – why you ask? Because due to either injury or suspension he’s missed all or part of each of the last five games against Cincinnati. The last time he took the field against the Bengals in Cincy he dominated, putting up three scores and 253 total yards. He has been amazing the last few weeks, going for 823 yards and five scores the last four weeks, and setting a Steelers single-game record for yards in a game a week ago. Look for Ben and company to get Bell the ball all day, and for him again to have a big day against a Bengals D that can be had.

Bengals QB Andy Dalton has been good most of the season, throwing 16 touchdowns compared to just six interceptions, but if there’s one team that he’s had some issues with over the years, it’s the Steelers. The black and gold have been good at getting pressure on opposing QB’s as of late, including Tyrod Taylor last week, but that’s not to say it’ll be easy to sack Dalton. The big news in the Bengals offense is they will again be without leading wide out A.J. Green, so if the Steelers can pressure Dalton and cover the tBengals other receivers and TE Tyler Eifert, they should be in solid shape.

3. Don’t Let Emotions Get the Best of You

We know the history, we’ve watched these teams basically fist fight over the last two seasons, get into both physical and verbal battles, and it spill to the point where the Bengals more or less gave the wild card game away last season with a late pair of personal fouls leading to a Steelers field goal. So it would be smart for the Steelers to practice what they preach, which is to NOT get into post play arguments with the Bengals or pushing or shoving matches that could lead to needless yards against. If anyone is going to try and draw the Steelers into dumb penalties, it’s Vontaze Burfict, who didn’t play in week two. The best way around the dumb penalties is to get an early lead, and lay it on the Bengals all day on the scoreboard.

Prediction: Momentum is on the Steelers side, and as well as they played on the road last week against a Bills team that had a lot of play for, I think they find a way to get the job done in Cincy. They seem to play well at Paul Brown Stadium, and with the Bengals hanging on to the playoff dreams by a thread, there’s no doubt the Steelers have it in them to crush their dreams and send them packing for the offseason. Look for Bell to have a major impact again, for the defense to do enough to harass Dalton and stop the run game, and for the Steelers to head home 9-5 ready for two home games to end the regular season. Pittsburgh 24 Cincinnati 18

Signing Le’Veon Bell is a Risk; But One the Steelers Might Just Have to Take
Steelers at Bengals NFL Week 15 Inactives